Bacillus cereus is a Gram-negative, spore-forming, rod-shaped bacterium (Figure 1) that causes food poisonings and food infections. This microorganism is a common soil inhabitant and can grow in almost all types of food. B. cereus was first identified as a foodborne pathogen by Hauge (1955) from a case of the diarrheal type of illness due to the consumption of vanilla extract. In 1971, the emetic type of food poisoning was found to be caused by B. cereus in fried rice, which gave its name of “fried rice syndrome”. The heat-resistant spore, a dormant structure of bacteria formed under stressful conditions, helps B. cereus to survive during food processing, thus raises issues of food safety, especially in pre-packed and ready-to-eat foods.

B. cereus forms resistant spores which protect it from extreme conditions such as temperature, pH, and radiation. The spore helps its persistence and transmission through processed, pasteurized, sterilized, and heat-treated food products, increasing its chance of human ingestion.  Contaminated foods either by B. cereus or the toxins produced by this bacterium food are the primary causes of the diseases (Figure 2). The food infection is caused by the growth of B. cereus in the intestine. Vegetables, meats, and dairy products are common vehicles for the transmission of this type of disease. Symptoms usually include abdominal pain and diarrhea that begin 4-16 hours after eating the contaminated food. On the other hand, the emetic syndrome of B. cereus food poisoning, also called “fried rice syndrome”, is due to the preformed toxin predominantly in starchy foods such as fried rice and pasta. Because the preformed toxins rather than the growth of the bacterium cause this type of illness, the onset of syndromes is more rapid compared to the diarrheal type. Symptoms are characterized by nausea and vomiting, starting in 1-5 hours after the consumption of contaminated foods. Both types of illnesses could be resolved without treatments and symptoms usually disappear within two days. However, individuals with compromised immune system may develop systemic infection due to introduction of the bacteria into the bloodstream.

Figure 2: Transmission pathways of B. cereus, demonstrating how it enters the food production, followed by the human digestive system. The bacteria spread through insects, higher trophic animals like cows, or foods, and the ingestion of contaminated foods leads to illnesses. Source: Lina Bendjaballah

B. cereus can form biofilms on abiotic surfaces or even living tissues. Biofilms are communities made up of bacteria and extracellular matrix, conferring B. cereus its adhesiveness and resistance to extreme temperature and pH. This bacterium secretes enormous number of metabolites, enzymes, toxins and generates resistant spores within biofilms. Ingestion of foods containing B. cereus in biofilms can lead to unproductive inflammation, a long-term inflammation that results in tissue death and connective tissue scarring. The biofilm helps B. cereus attach to the intestine tissues, allowing it to persistently trigger immune responses through the release of bacteria or toxins and enzymes it produces.

B. cereus colonizes, grows and releases toxins in the human small intestine, which can cause food infections. Hemolysin BL (Hbl), non-hemolytic enterotoxin (Nhe), and cytotoxin K (CytK) are the three enterotoxins that B. cereus produces and are responsible for the diarrhoeal syndrome. These enterotoxins kill host cells by forming pores in their cell membranes (Figure 3). Hbl can also weaken immune responses by destroying the immune cells, such as macrophages and dendritic cells, which accelerates the spread of B. cereus and tissue damage. Widespread destruction of epithelial tissue in the intestine leads to ineffective absorption of water and, therefore, diarrhea. 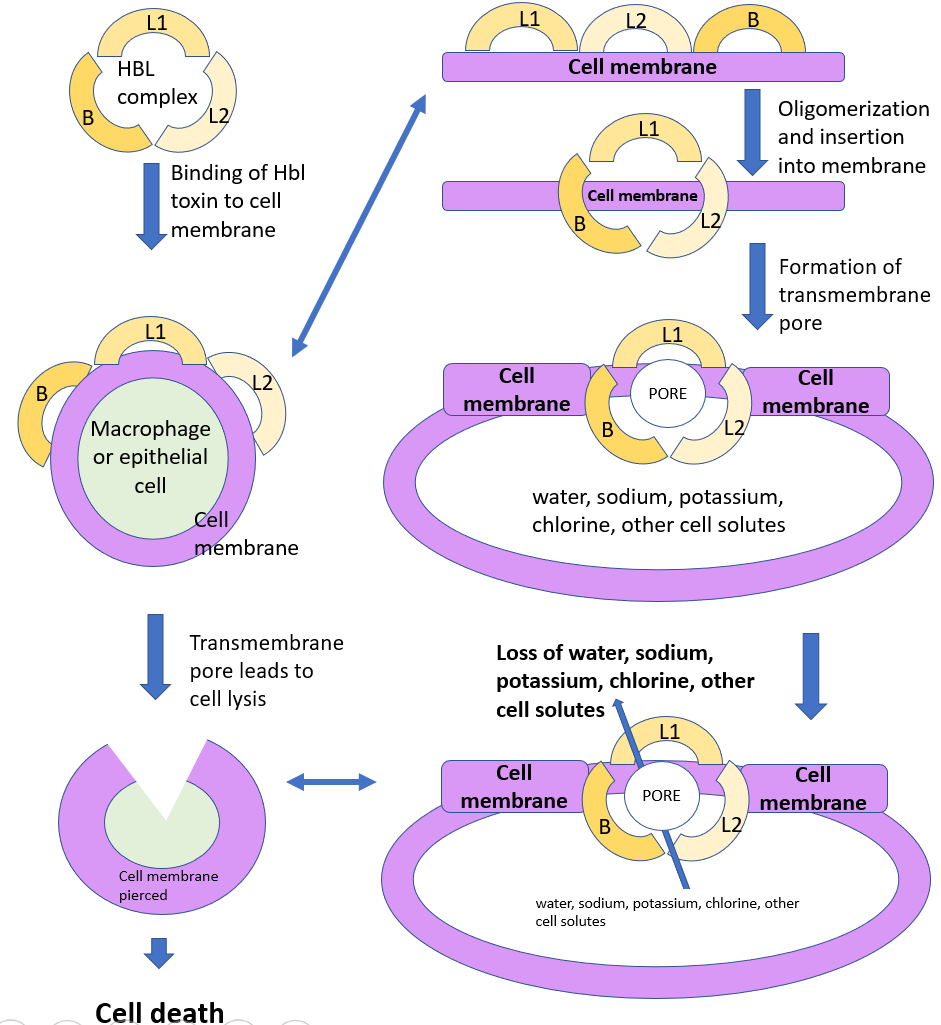 Figure 3: Illustration showing possible mechanism of Hbl toxin according to description of Shoeni and Wong (2005). As one of the three pore-forming enterotoxins, Hbl could perforate cell membrane through oligomerization (binding of smaller components into a unit) of its 3 components. This leads to massive ions and water loss of the targeted cell, severely disturbing the cell’s normal functions and eventually leading to cell lysis. Source: Xin Yue Liu

On the other hand, the food poisoning or intoxication is attributed to the toxin called cereulide in the contaminated foods. This toxin is released in the food before it’s ingested. This preformed toxin is resistant to extreme pH, heat, and breakdown of proteins. Thus, cereulide in foods may persist after reheating and stomach acid. This emetic toxin causes mitochondria, the powerhouses of cells, to swell by interfering with the important energy production process called oxidative phosphorylation. This interference will halt energy production in the form of ATP, an organic chemical that provides the energy required in many biological functions such as muscle contraction, protein synthesis, regulation of normal cell functions, etc. In this case, the muscle cells of the gastrointestinal tract with dysfunctional mitochondria cannot survive due to energy deficiency, leading to cell death and inevitably causes damages in the muscle tissue. The progressive degeneration of the muscles leads to gastrointestinal dysmotility and symptoms like vomiting and nausea.

Other various enzymes also contribute to the virulence of B. cereus. Beta-lactamase provides the bacterium resistance to beta-lactam antibiotics such as penicillin and its derivatives. B. cereus also produces collagenase to degrade extracellular matrix (secreted proteins and polysaccharides providing structural and biochemical support to surrounding cells), thus facilitating its invasion of tissues. Protease is another weapon that B. cereus uses to infect host cells by hydrolyzing important proteins such as hemoglobin (carries oxygen in red blood cells) or albumin (regulates the osmotic pressure of the blood).

The percentage of foodborne diseases due to B. cereus differs from country to country. During the 1990s, B. cereus was responsible for 47% of the total food poisoning cases in Iceland, 22% in Finland, and 8.5% in The Netherlands. This bacterium is also the primary cause of foodborne diseases in Norway. Other countries reported much lower numbers, such as England and Wales (0.7%), Japan (0.8%), USA (1.3%) and Canada (2.2%). Since most patients with food poisoning recover quickly and few seek medical advice, the number of B. cereus cases might be heavily underestimated. The dominant type of food poisoning caused by B. cereus also varies in different countries. The diarrheal syndrome is more prevalent in many European countries such as Hungary, Finland, Bulgaria, and Norway, whereas more cases of the emetic type have been reported in Japan.

Foods contaminated by B. cereus or the toxins it produces are the major causes of foodborne illnesses. Although B. cereus is an uncommon causative agent in the United States, an outbreak of B. cereus gastroenteritis occurred among 140 guests who attended a wedding reception in Napa County due to having contaminated Cornish game hens. Therefore, good hygiene and food handling practices are important in controlling B. cereus intoxication and food infection.

Usually no treatment is needed in both the diarrheal and emetic cases since the symptoms are mild and can be resolved on its own. The patients can recover within two days. However, in some severe cases, administration of fluids is required to avoid excessive water loss. Since B. cereus is widely present in the environment, prevention methods thus focus on preventing the germination of spores and minimizing the production of toxins. Foods should be maintained above 60°C or below 4°C, and reheating premade food should ensure that the internal temperature reaches 74°C.