by Bernice Samuel and Jasraj Kaur

Vibrio cholerae is a member of the Vibrionaceae family and exists as a facultative anaerobic bacterium characterized by its non-pore forming, Gram-negative behaviour and comma shape. V. cholerae was first isolated as the cause of cholera by an Italian anatomist in 1854 but his research was not broadly recognized until later in 1884. Cholera is an acute state whereby a person suffers from severe watery diarrhea which leads to dehydration and even death if untreated. The main sources of V. cholerae are human faeces and water.

V. cholerae is transmitted through the ‘fecal – oral route’. In the last phase of causing disease, it escapes into the feces which enables it to enter water. In places where sanitary water is unavailable, the pathogen is quick to be transmitted orally. Once it reaches the stomach, the acidity is a great protective mechanism and destroys V. cholerae almost entirely. However, a small amount makes it to the bowel of the small intestine where it is able to re-establish its population. Through the production of toxins, epithelial cells in the small intestine are induced to secrete vast amounts of electrolytes and water. This excess fluid is excreted from the body in the form of diarrhea and to a lesser extent vomiting. The amount of water loss varies between individuals, depending on the strain they are infected with and the amount that colonizes in the bowel. It is important to note that most strains are ‘free – living’ (can live independently without a host) and only a few such as the O1 and O139 are responsible for causing disease. Individuals accredited with having cholera release life-threatening levels of water (as much as 20L a day) which, in turn, results in hypovolemic shock. In simple terms, the excessive loss of fluid prevents the heart from pumping enough blood to the body, resulting in a weakened pulse. Other symptoms defining the onset of cholera include having muscle cramps, a scaphoid abdomen and loss of skin turgor. In other words, the elasticity of the body’s organs dampen. Furthermore, if the individual is not hospitalized, a new condition called tubular necrosis develops whereby the epithelial cells of the kidney die, immediately resulting in the death of the individual.

There have been many cholera pandemics over the past years with most common cases occurring in tropical and subtropical regions. The World Health Organization (WHO) estimated that 3-5 million cholera cases occur predominantly in Asia and Africa. Most cholera cases occur in children under 5 years old and pregnant women. Epidemics in endemic areas tend to occur during the hot season.

Drinking water contaminated with V. Cholerae or with faeces of an infected person are the most common ways to acquire Cholera. Other hosts range from planktons and zooplankton that have the infectious agent. Environmental factors such as surface change and terrestrial nutrient discharge can lead to production of more hosts. The Haiti cholera is the worst epidemic in recent history that has killed at least 8 534 people and hospitalized hundreds of thousands while spreading to neighbouring countries as well.

Once the bacteria establishes itself in the bowel, it must penetrate the mucous to reach the epithelial layer. Its long tail allows it to propel itself through this thick layer along while the bacteria also produces mucianlytic enzymes which destroy mucous integrity. Upon reaching the epithelial layer, the bacterium anchors itself onto microvilli by a mechanism yet to be understood. However, the so – called ‘coregulated pilli’ is suggested to be one of the key players. Furthermore, the way by which the bacterium induces excessive leakage of fluid from the cells is described in the following virulence mechanism. It secretes a protein polymer known as cholera toxin which binds to epithelial cells. Subunit B of this polymer binds to the glycolipids exposed on the outside of the host cell, bringing the bacterium and host cell in closer contact. The A subunit can then penetrate the host cell membrane whereby a cascade of intracellular molecular events takes place resulting in higher cAMP (Cycline adenosine monophosphate) levels (figure 1). This, for a reason yet to be understood, causes the secretion of chlorine, bicarbonate and water by the epithelial cells contacted by the toxin. The fluid accumulates to high levels and the body’s only option is to dispense it – mainly through the form of diarrhea. As high as 108 live Vibrio’s are found in 1 ml of diarrhea allowing it to effectively contaminate water that is then consumed by the host. 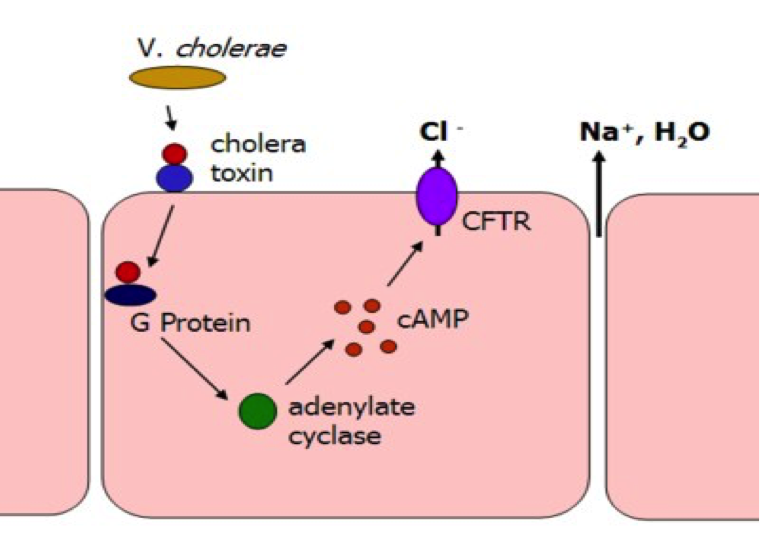 Figure 2: Steps required for V. cholerae to establish disease in the human host and transmit to others.

Cholera is curable but because dehydration happens so quickly, it is essential to get antibiotics that kill the bacteria. Antibiotics are mainly used to decrease the diarrhea duration and reduce the bacteria excretion that help avoid the rapid disease spread by 50%. Although there is a vaccine against cholera, drinking water that has been boiled and chemically disinfected is the best way to avoid it.