Streptococcus suis (S. suis) is an emerging pathogen that predominantly infects pigs. The pathogen can lead to the development of several different diseases, such as meningitis and septicemia. The first reported incident of S. suis was with pigs suffering from septicemia in the early 1950s. This bacterium not only caused a large set back in the swine industry, but also began to directly harm human beings. Not long after the first reported case of S. suis in pigs were the first human S. suis cases. These cases of S. suis in both humans and pigs indicate that it is a zoonotic pathogen, a pathogen capable of transferring from animals to humans.

Humans can be infected with S. suis when they come into direct contact with infected pigs or contaminated raw pork. The pathogen’s ideal environment is the upper respiratory and intestinal tract of pigs (Figure 1). Infected pigs can be asymptomatic. As a result, S. suis can spread to humans unknowingly. The bacterium is most commonly transferred to humans due to wounds on the skin or mucosa that allow the pathogen entry into the body. First, the pathogen will encounter and infect epithelial cells. As the infection spreads to other tissues and potentially the bloodstream, the immune system will kick in and try to kill off the invaders. This can however lead to an overreacting immune system, causing a high amount of inflammation, systemic shock and potentially death. 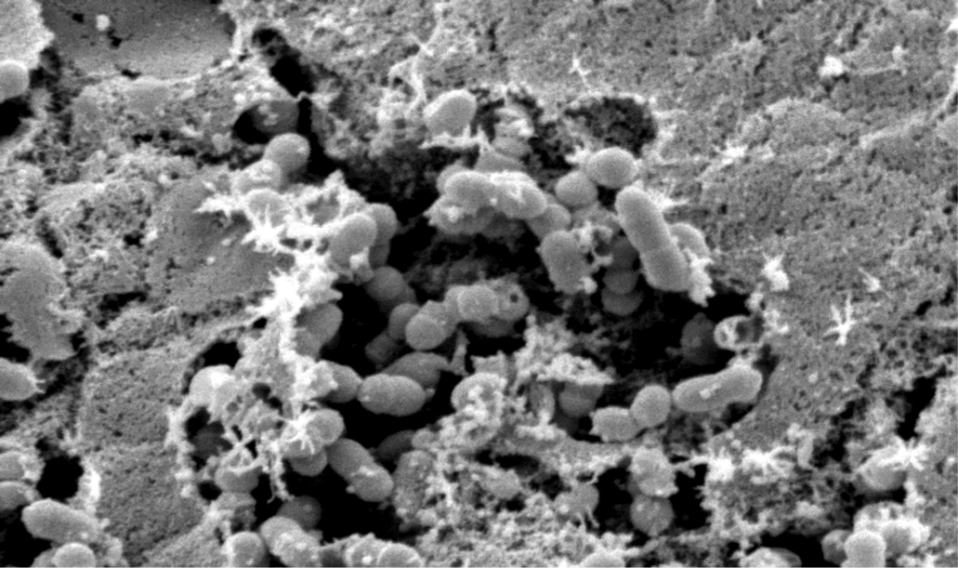 Figure 1. Scanning Electron Microscopy of S. suis in a Sheet of Mucus on the Surface of the Nasopharyngeal Epithelium from a Pig. (Source: Department of Infectious Diseases, Dr. Shiranee Sriskandan (2006). Available from: http://journals.plos.org/plosmedicine/article?id=10.1371/journal.pmed.0030187)

Unfortunately, survivors at this point may then develop meningitis if the infection is left untreated. Meningitis is caused when the pathogen travels to the central nervous system. S. suis must pass the blood-brain barrier and infect the cells in this region in order to cause the disease. Symptoms that occur with the disease include headaches, fevers, vomiting, and hearing loss. Deafness and vestibular dysfunction are among the most common aftermaths in survivors. An illustration on the development of S. suis infection is shown in Figure 2. More than 1,500 cases of S. suis infections were reported by the end 2012, with the highest intensity in Thailand, China, and Vietnam. However, these are only reported cases. The actual number of incidences would have been much higher, especially in the aforementioned areas where S. suis was common. Most of the patients were adults with an average age of 51.4 years. The majority of these adults were men (76.6%). The pooled fatality rate for infected patients was reported as 12.8%. Fatality was mostly associated with systemic infections, leading to hypotension, septic shock, multiorgan failure, and disseminated intravascular coagulation.

S. suis is not a notifiable disease in many countries, but in combination with the lack of awareness and treatment, many undiagnosed or misdiagnosed cases occur in these countries. Most incidents of S. suis infections were characterized as sporadic cases. However, in one contrary case, an outbreak in Sichuan Province, China in 2005, resulted in 215 cases and 38 deaths. This demonstrates the significance of S. suis as an emerging pathogen.

These virulence factors do not act alone. Several factors are required to cause pathogenesis. For instance, S. suis has a capsule, an outer shell made of polysaccharides (Figure 3). Its capsule is decorated with sialic-acid, which is also present in the host’s cells. Sialic-acid suppresses the activation of the host’s immune system through the deactivation of the complement system by the alternative pathway. This allows the pathogen to cloak from the host’s defenses, by masking itself as a host cell itself.

S. suis also has adhesins (such as enolase, Fbps), proteins that act as glue and allows them to attach to the host’s epithelial cells and form biofilms, a slimy substance that holds cells together. Adhesins are important to allow the pathogen to get close enough to invade host cells. Interestingly, the capsule hinders the capacity of adhesins for the attachment to host cells; therefore, S. suis needs to down-regulate its capsule to expose the adhesins to stick to host cells. S. suis also produces a toxin called suilysin, which can puncture and kill host cells, allowing S. suis to escape and disseminate. It can also cause damage to the host body because of its ability to trigger inflammation.

S. suis is vulnerable to antibiotics such as penicillin, ceftriaxone and vancomycin. The principles of treatment are the same as treating other bacterial meningitis, using ceftriaxone with or without vancomycin. Intravenous treatment with penicillin G has been used successfully, even though one case of penicillin-resistance had been noted in humans. Early administration of antibiotics prior to meningitis is recommended in order to reduce the risk of hearing loss.