By Sara Cantini and Victoria Lee

Clostridium botulinum is a rod-shaped bacterium (Figure 1), naturally occurring in the environment, particularly in soil. Under stressful conditions, C. botulinum form resistant spores that can even withstand most standard cooking. In most preservatives and food processing nowadays, acidity and high salt concentrations prevent C. botulinum spores from germinating so that they do not cause damage if ingested. However, if they do develop, growing C. botulinum produces botulinum neurotoxins (BoNT), which are the most toxic substances known to man. Therefore, ingestion of preformed BoNT or growth of the bacterium within a host can be lethal. Interestingly enough, diluted concentrations of BoNT are used in anti-aging Botox. 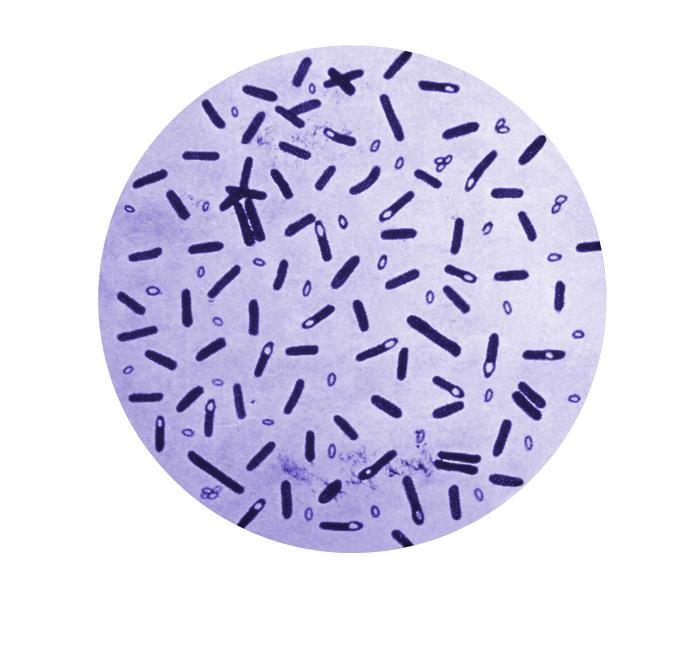 Botulinum comes from the latin word botulus, meaning sausage. In Europe in the 18th and 19th century, the consumption of blood sausage was sometimes associated with muscle paralysis, breathing problems and even death. This was because sausages provided the perfect environment for C. botulinum to grow and produce toxins at the time. The organism was first isolated and identified in 1897 from contaminated homemade raw ham in Belgium and from the spleen of a man who died from ingesting it.

C. botulinum can cause a severe neurological disease in humans and animals called botulism. The most common form is food-borne botulism, which often results from the ingestion of poorly preserved foods contaminated with preformed neurotoxins. Moreover, spores can establish themselves in deep wounds, where they can germinate and produce toxins capable of causing wound botulism. Finally, infant botulism occurs in children less than 1 years old and results from the production of BoNTs by established C. botulinum in immature intestines.  Infant botulism has been proposed as a potential cause of sudden death syndrome (SIDS) since both result in a similar sudden respiratory arrest. Botulism is not infectious because the absorption of BoNT in the bloodstream is required for the development of symptoms of the disease.

In all cases, the disease first manifests itself with symptoms such as double vision, inability to focus, difficulty swallowing, slurred speech, dry mouth and muscle weakness. The progression of the disease can lead to paralysis of the muscles responsible for breathing.

Most incidences of foodborne botulism results from the accidental consumption of poorly preserved foods or home-prepared foods that contain preformed BoNTs. There were many outbreaks in the 20th century due to poor canning processes of foods. In recent years, there have been about 1,000 cases annually worldwide. The incidence of wound botulism is quite low, but almost exclusively occurs in injection drug users.  Most cases of infant botulism are due to the consumption of honey contaminated with C. botulinum spores before the age of 1. Annually, an average of 145 botulism cases are reported in the United States, with the majority of them being cases of infant botulism.

C. botulinum produce neurotoxins (BoNTs) which form a large complex with other proteins such as hemagglutinin and other non-toxic neurotoxin associated proteins (NAPs). These proteins protect the neurotoxin in the presence of harsh acidic environments and digestive proteases (enzymes that break down proteins) encountered in the host’s digestive tract. They also facilitate the absorption of the neurotoxin into the general circulation by disrupting the layer of cells which form a protective barrier. BoNT circulates in the bloodstream until it reaches neuromuscular junctions between neuron endings and muscle cells. The domain known as the heavy chain binds to receptors on the cell surface and mediates its internalization via a process called receptor-mediated endocytosis (Figure 3). The heavy chain, now inside a pocket called an endosome, allows the domain known as the light chain to escape. In the nerve endings, there are similar pockets called synaptic vesicles which contain chemicals called acetylcholine. Normally, SNARE proteins are involved in fusing these vesicles to the cell membrane in response to an electrical signal (Figure 2). Acetylcholine is thus released in the synapse (space between neuron endings and muscle cells) so that they can bind to receptors and induce muscle contraction. In the presence of BoNT however, the light chain cleaves these SNARE proteins, which inhibits the release of these neurotransmitters and results in muscle paralysis (Figure 3).

In general, if people are diagnosed and treated early for botulism, most of them will recover muscle strength within weeks to months. Rapid administration of equine botulinum antitoxins and human botulinum immune globulin is used to treat adult and infant botulism respectively. They act by neutralizing the effect of circulating toxins in the bloodstream.  Supportive intensive care such as intubation and mechanical ventilation is often also required. However, failure of rapid diagnosis or proper treatment can result in death within three to ten days due to the rapid development of respiratory failure.