by Stephanie McKee and Racha Lakrouf

Listeria monocytogenes is a gram positive bacteria that is responsible for causing listeriosis. L.monocytogenes was first identified in 1926 based on six sudden deaths in rabbits.  However, L.monocytogenes was not identified as a cause of foodborne illness until 1981 when an outbreak of listeriosis in Halifax, Nova Scotia caused 18 deaths and was linked to consumption of contaminated coleslaw. The most common serotypes that cause disease in humans are 1/2a, 1/2b and 4b and they result in 90 % of all cases. L. monocytogenes is a facultative intracellular parasite meaning that it can survive and grow inside host cells, allowing it to easily evade the immune system.  Unlike most bacteria, L. monocytogenes is cold-adapted allowing it to survive and multiply in some foods in the refrigerator.

L. monocytogenes is usually transmitted to humans through ingestion of contaminated food. It may also be transmitted to animals through contamination of silage. L. monocytogenes causes an infection called listeriosis. In most healthy individuals, infection will result in no symptoms or only mild flu-like symptoms. whereas others would exhibit symptoms including headache, fever, myalgias, abdominal cramps, vomiting and diarrhea. L. monocytogenes can be especially dangerous for pregnant women due to its ability to cross the placenta and cause infection in the fetus.  This infection could result in premature birth, spontaneous abortions, or stillbirth. The bacterium invades the gastrointestinal epithelium before entering and multiplying in the host’s monocytes and macrophages, two important defence mechanisms that phagocytose and digest the bacterium using a phagolysosome. The most common form of the disease caused by L. monocytogenes is invasive listeriosis where the pathogen travels from the intestines to the blood causing septicemia, to then invade the central nervous system possibly causing meningitis and meningoencephalitis.  Recent cases of febrile gastroenteritis prove that the bacterium is also able to cause foodborne gastroenteritis with symptoms including fever and diarrhea within 24 to 48 hours after ingestion of the pathogen. 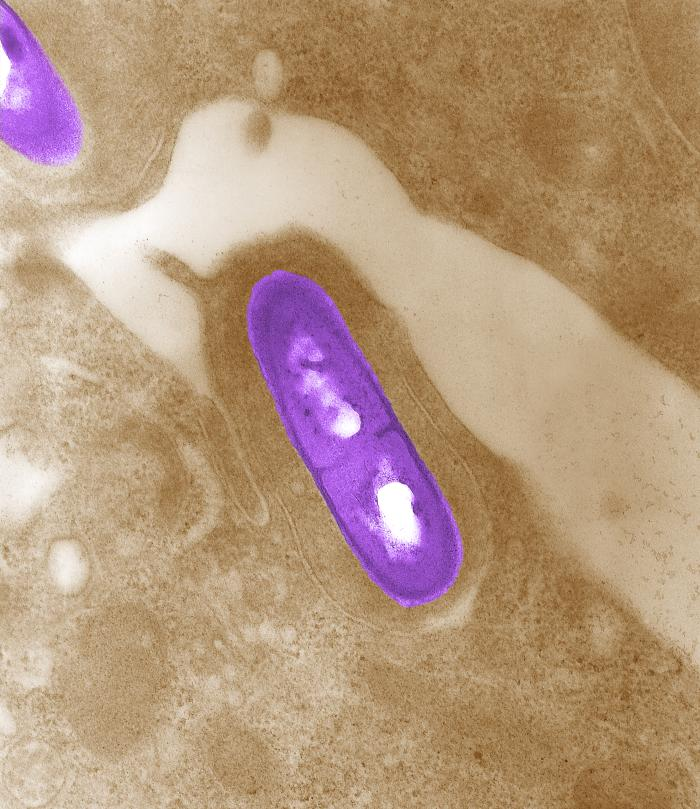 Listeriosis is uncommon in healthy individuals but incidence is higher in at risk individuals including pregnant women, young infants, patients undergoing organ transplants, elderly, and immunocompromised individuals.  Infection is more common in males. The CDC estimates that approximately 1600 cases and 200 deaths occur each year due to listeriosis in the United States.  The average annual incidence of listeriosis in the U.S was 0.26 cases per 100, 000 people.  However, the rate of listeriosis among pregnant women is higher, around 12 cases per 100,000 and 115 cases per 100,000 people in AIDS patients.  The largest listeriosis outbreak in U.S history occurred in 2011 when 147 people were affected, 33 deaths and 1 miscarriage occurred due to eating contaminated cantaloupe from a single farm.

The main reservoirs for L. monocytogenes are soil and water from agricultural areas, silage, and minimally processed foods or foods that are preserved by refrigeration.  Foods that are common causes of infection include unpasteurized milk and dairy products, some cheeses, undercooked or minimally processed meat such as hot dogs, chicken and seafood.  Healthy humans and animals may also represent a small percent of reservoirs, since 2-6 % of the population will be healthy carriers.

L. monocytogenes usually colonizes the small intestine. The bacterium enters the cells lining the gastrointestinal tract through a mechanism called the “zipper“ mechanism using invasion molecules to disrupt the host’s cell membrane. Macrophages will also phagocytose the bacteria in order to neutralize it in a phagolysosome. A phagolysosome is formed inside phagocytes by first engulfing the bacteria in a vacuole then fusion of this vacuole with a lysosome containing digestive enzymes. Pathogenic strains of L monocytogenes will produce an exotoxin and virulence factors called listeriolysin O, phospholipase A, phospholipase B and phospholipase C in order to destroy the phagolysosome’s membrane and escape. The bacterium will then multiply in the cytoplasm of the host’s cell and uses the cell’s thin filaments called actin as a tail to move towards the membrane. L monocytogenes will then exit from the cell using pseudopods and enters the neighboring cell forming a double membrane vacuole that the pathogen will need to escape from using the same virulence factors. The pathogen will then spread from cell to cell repeating it’s life cycle and hiding from the immune system.

L. monocytogenes is usually susceptible to treatment with most antibiotics such as penicillin. In order to be effective, the antibiotic must enter host cells and bind to the penicillin-binding protein 3 (PBP3) of listeria and remain active. The antibiotics of choice for treatment of listeriosis are ampicillin and penicillin and are often used in combination with gentamicin.  In patients with penicillin allergies, trimethoprim/sulfamethoxazole can also be used.  However, L. monocytogenes is usually resistant to the cephalosporins and tetracycline resistance has also been described.  A main factor in antibiotic resistance is determined by the presence of a signal transduction system called LisRK.