Staphylococcus saprophyticus is a frequent causative agent of uncomplicated lower urinary tract infections (UTI) in humans. Due to its high prevalence in slaughtered animal carcasses, abattoir workers’ gloves and animal products, the bacterial pathogen is thought to have a zoonotic origin.

To differentiate between the various species of staphylococci, the bacteria are evaluated on their ability to produce coagulase. As S. saprophyticus is among the coagulase-negative staphylococci (CoNS), it lacks the enzyme that catalyzes the formation of fibrin from fibrinogen. Before 1960, CoNS observed in urine samples were assumed to be urinary contaminants. However, in 1962, Toress-Pereira established the first connection between CoNS and human disease when he isolated CoNS from the urine of 40 women with acute UTIs. S. saprophyticus officially became acknowledged as a common cause of UTIs in the early 1970s.

S. saprophyticus is predominantly transmitted to humans through the consumption of contaminated animal products. The microorganisms first colonize the gastrointestinal tract. Then, activities such as sexual intercourse facilitate the transfer of the bacteria from the anus to the periurethral area, where they can ascend into the urethra and eventually the bladder. An infection in the lower urinary tract, also known as honeymoon cystitis, is established when S. saprophyticus circumvents the host’s defences, colonizes, invades and replicates within the uroepithelium. Symptoms of S. saprophyticus lower UTIs include: red and white blood cells in urine (hematuria and pyuria), painful urination (dysuria), frequent urination and back pain. If the bacteria continue to rise to the kidneys, a potentially life-threatening infection in the upper urinary tract can result called pyelonephritis.

Women are 15 times more prone to developing UTIs than men due to their shorter urethras. Over 150 million women worldwide suffer from UTIs each year. Though the infections are primarily caused by E. coli, S. saprophyticus is responsible for 10 to 15% of cases. The actual rate of infection by S. saprophyticus is likely higher, however, as the bacteria tend to be overlooked when dominant uropathogens are also present in urine.

S. saprophyticus colonization is especially prevalent in late summer and fall. The most susceptible individuals to cystitis caused by S. saprophyticus are sexually-active young women between the ages of 16 and 25. Among this group, S. saprophyticus accounts for 42.3% of all cases. Infected women are also more likely to have recently had a menstrual period, experienced a symptomatic UTI within the previous year, swam in a pool, had sexual intercourse while suffering from vaginal candidiasis or used vaginal spermicides that disrupt the normal vaginal flora. Though less common, the infection can also target young boys, male homosexuals and elderly men with urinary catheters.

Once the periurethral region becomes contaminated with S. saprophyticus from the gut, the uropathogen first colonizes the urethra before traveling up to the bladder. To eliminate the bacteria, the host executes defences such as the secretion of mucus to prevent bacterial adherence to the bladder mucosa. Poorly attached bacteria are then expelled from the body with urine, which encompasses antibacterial properties (e.g. acidic, high osmolality, high concentration of urea and organic acids). Despite the host’s best efforts, the properties of S. saprophyticus allow it to colonize the bladder. To attach to the uroepithelial cells, S. saprophyticus expresses several adhesins: extracellular slime, the collagen- and fibronectin-binding protein Sdrl, the surface-associated fibrillar lipase Ssp and the autolytic/adhesive protein Aas. In addition, the adhesin and hemagglutinin UafA binds to both fibronectin and membrane proteins on red blood cells, causing the red blood cells to agglutinate (clump together). S. saprophyticus can also produce urease (Figure 1). The enzyme hydrolyzes the urea in urine to ammonia and carbon dioxide (Figure 1). Ammonia supports the bacteria’s survival by increasing the pH of urine (Figure 1) and triggering the formation of urinary stones. Furthermore, ammonia is toxic to uroepithelial cells and causes direct tissue damage. 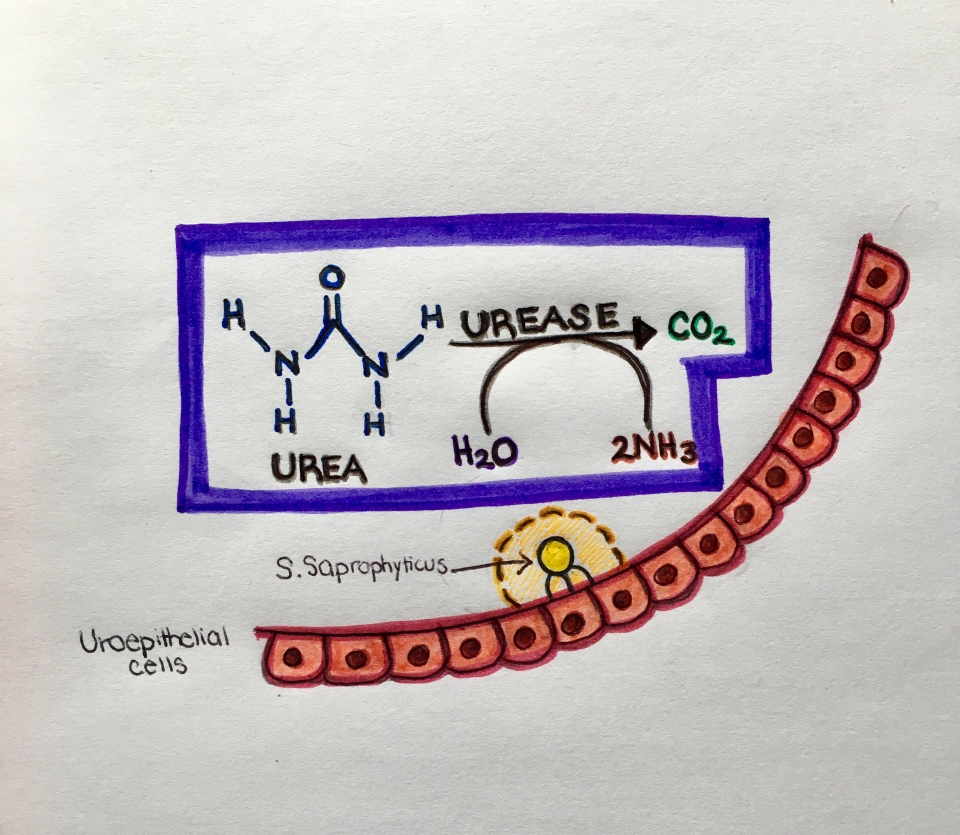 Figure 1: The production of urease by S. saprophyticus; As the pathogen cannot survive in low pH environments such as that found in urine, it produces the enzyme that hydrolyzes the urea in urine to ammonia and carbon dioxide. Ammonia raises the pH around S. saprophyticus, permitting its existence (Figure by Liz Brenhouse).

Once the host senses a bacterial infection, immune system cells (macrophages and neutrophils) are called in to kill the invading pathogen in a process called phagocytosis (Figure 2). Normally in phagocytosis, the macrophages and neutrophils surround the bacteria and engulf them. The bacteria are then trapped inside a pocket, the phagosome, within the immune system cells. Digestion of the pathogen occurs when the phagosome fuses with a specialized vesicle that contains degradative enzymes. However, S. saprophyticus bacteria can escape phagocytosis by embedding themselves within the urinary stones. Additionally, in coating themselves with the host’s proteins (collagen and fibronectin), the bacteria can disguise themselves to prevent being identified by antibodies, blood proteins that recognize and bind to foreign substances. Once bound, antibodies act as flags for macrophages to come and destroy their targets. Individuals suffering from UTIs caused by S. saprophyticus are prescribed antibiotics for one week or less. Though the uropathogen is resistant to nalidixic acid, a common treatment for UTIs, it is generally susceptible to other antibiotics including ampicillin, cephalosporins, nitrofurantoin, tetracyclines, sulfonamides and trimethoprim. While the medications differ in their modes of action, frequently-prescribed trimethoprim-sulfamethoxazole works by blocking the production of tetrahydrofolic acid (THF) which bacteria require for growth. Preventative measures can also be taken such as staying hydrated, wiping from front to back after using the bathroom and urinating before and after sexual intercourse.