Trueperella pyogenes bacteria is part of the normal microbiota of the skin, upper respiratory, gastrointestinal, and urogenital tracts of animal species. The bacterium is usually involved in mixed bacterial infections and is characterized by a strong proteolytic activity. When the defenses of the host are compromised, T. pyogenes acts as an opportunistic pathogen and causes suppurative infections – characterized by pus formation – such as mastitis, endometritis, and abscesses.

Although there is not much known about the microorganism T. pyogenes, it has been found to transmit to animals through insect bites, abrasions, wounds, and contaminated farming equipment such as milking machines. Even though the mechanisms causing the infection remain poorly understood, T. pyogenes is known to be the cause of various pyogenic diseases involving the production of pus.

T.pyogenes causes mastitis in cattle. When the bacteria reach or enter the udder tissue, an infection occurs which results in an inflammatory response. The udders become swollen, hard and milk may become watery, or pus may be released. T. pyogenes can infect the udder alone or with other microorganisms present. The bacterium has been found to be transmitted by the insect, Hydrotae irritans, which leads to an outbreak of mastitis in pastured cows every summer. In this case, the udder is swollen, hard and painful with an enlarged teat. The udder secretes thick green/yellow pus.

In most animal species, the microorganism has been found to cause abscesses in the liver or kidney and occasionally in the lymph nodes in the head and neck region when being activated under the skin. An abscess in the liver or kidney is a pocket of pus, composed of white blood cells and dead cells, that forms in their tissues. The infection also causes swelling and inflammation to the organ which causes pain. In the case of lymph nodes, the abscess swells the neck area making it painful to open the mouth and eat.

In cattle, endometritis is a frequent disease that comes with a T. pyogenes infection mixed with other bacteria such as E. coli. Endometritis is an infection of the uterus where the functional lining called the endometrium is inflamed. After calving and the epithelium of the endometrium is interrupted, the pathogen can invade and cause damage to the tissue. While this happens, an influx of inflammatory cells enters the tissues and the endometrium becomes inflamed. This infection not only enlarges the uterus but there may also be a discharge of pus from the vulva. Therefore, endometritis has an impact on the fertility of cows.

T. pyogenes infections are distributed worldwide and follow sporadic patterns. Since the bacteria is a commensal on mucous membranes, the prevalence of the consequent diseases depends on the host species’ stress or trauma experiences. Indeed, T. pyogenes acts as an opportunistic bacterium and exerts its pathogenic functions only when the host’s defenses are weakened. However, the risk factors of the infection’s development are difficult to estimate and not completely understood.

T. pyogenes infections are rare in humans and usually occur in immunosuppressed patients causing endocarditis, pneumonia, sepsis, and ulcers. Since T. pyogenes is not part of the human microbiota, these diseases are zoonotic and therefore transmitted to humans via animal contact. On the other hand, T. pyogenes infections readily occur in both wild and domestic animals. Livestock species – especially cows and pigs – are highly susceptible to these infections which significantly impact animal production industries because of the consequent decrease in reproductive efficiency as well as meat and milk production. The most prevalent type of a T. pyogenes outbreak is summer mastitis in cattle, which has a 50% mortality rate. Affected mammary glands have a low chance of getting cured, which is why the main objectives when treating cattle mastitis are to save the animal and to prevent the spread of the infection to the rest of the udder.

T. pyogenes secretes an exotoxin – called pyolysin – which is considered the primary virulence factor of the bacteria. Pyolysin belongs to the cholesterol-dependent cytolysin (CDC) family which forms large 𝛽-barrel pores in host cell membranes, by a process called cell lysis. Water-soluble pyolysin molecules are first secreted by the bacterium. They then bind to target host membranes containing cholesterol and oligomerize into multimer pre-pore complexes. Pore formation is characterized by the complete insertion of the pre-pores into the cell membrane. To do so, the pyolysin molecules – which are composed of four domains (Figure 2.a.) – must significantly change their conformation to form 𝛽-barrel channels and separate their Domain 2 and Domain 3. As so, 30 to 50nm transmembrane pores are created, allowing various ions and proteins to move out of the host cell consequently leading to cell lysis and death.  The steps following pyolysin’s mechanism of action against host cells are illustrated in Figure 2. b. 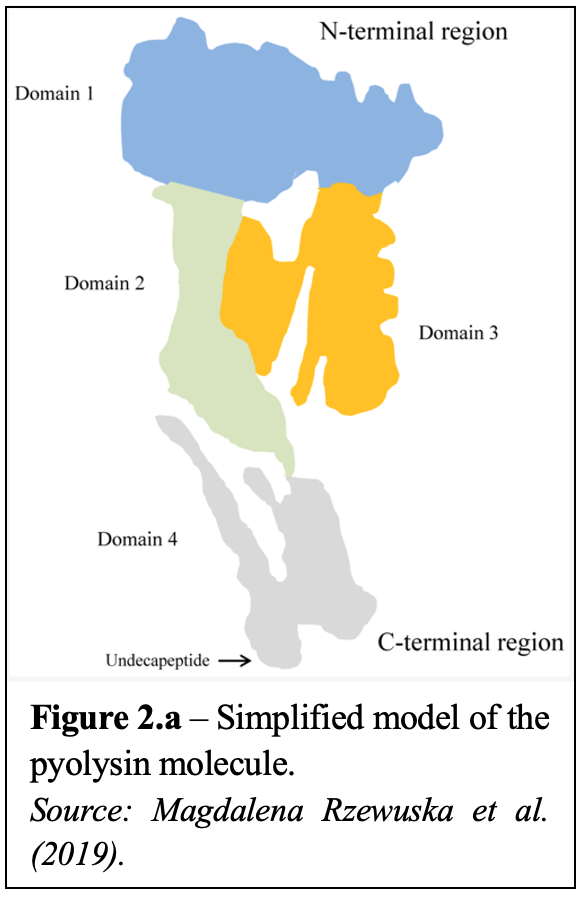 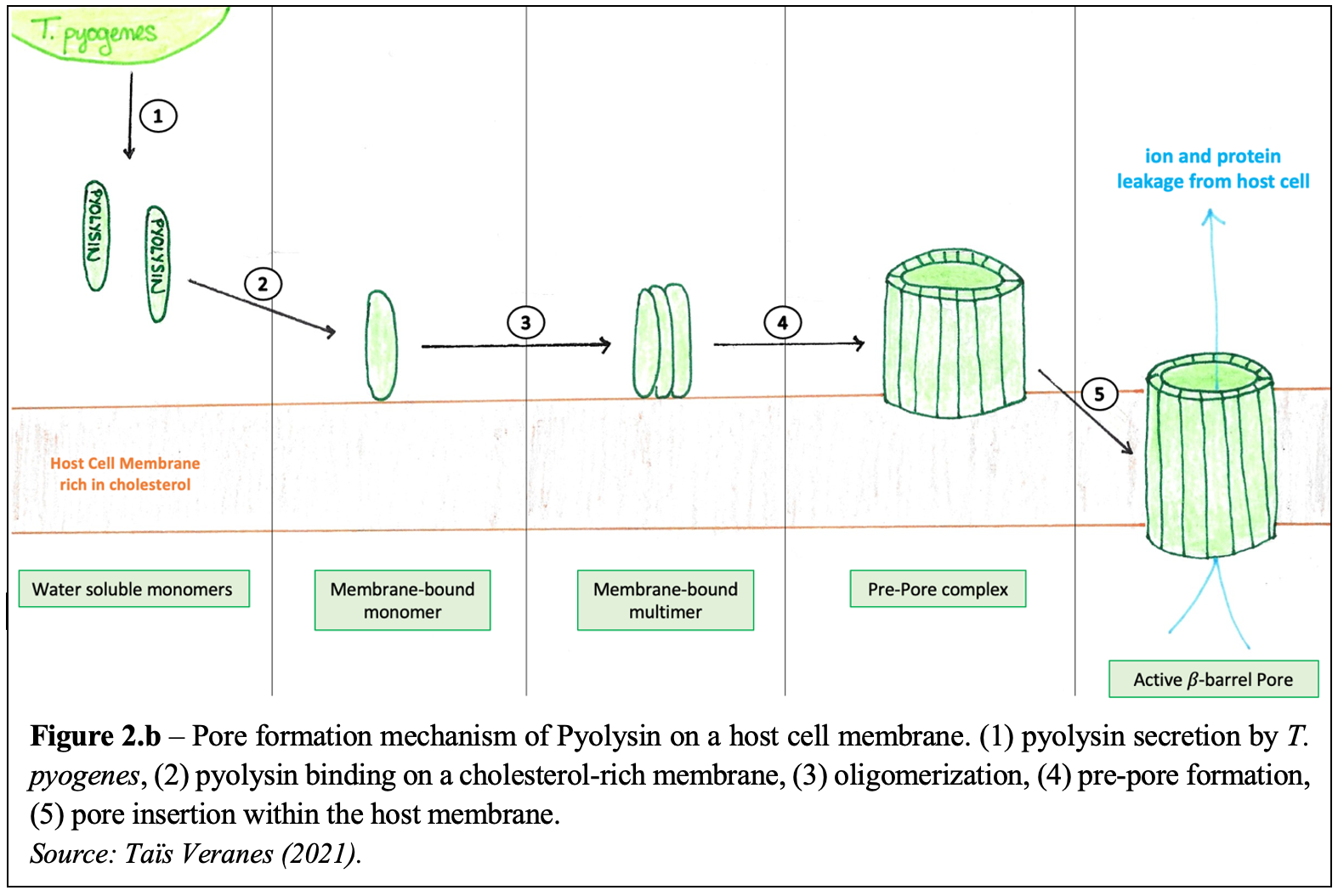 Although it is the most potent, pyolysin is not the only virulence factor of T. pyogenes. Indeed, the bacteria express several surface-exposed proteins – such as fimbriae, extracellular matrix-binding proteins, and neuraminidases – involved in the adherence and mucosal colonization of host tissues. Furthermore, T. pyogenes can also form biofilms which increase the bacterium’s resistance against the immune response of the host.

T. pyogenes is generally susceptible to beta-lactams antibiotics. However, the microorganism is becoming resistant to some antibiotics such as tetracycline by preventing it from reaching the infection site. In the case of clinical mastitis and endometritis, intramammary antibiotics and non-steroidal drugs are used for mild mastitis; but if the infection spreads throughout the body, then systemic antibiotics are given by intramuscular route are also needed. When treating summer mastitis, the same antibiotics are beneficial to fight against the infection in mild cases; however, for severe cases, anti-inflammatory drugs are added to the treatment plan to relieve the animal of pain and swelling. Severe cases also can lead to amputation of the affected teat to help with drainage of pus and may lead to the animal being culled to avoid the spread of the infection. Treatments for abscesses are the same ones used for clinical mastitis however, in some cases, draining of abscesses of the pus is required.