Cases of antibiotic resistance have become a prominent concern for our healthcare system. Antibiotic resistance is a result of bacteria that have evolved to overcome antibiotic treatment. For instance, mutated bacteria may begin producing enzymes that give them resistance to antibiotics; this offers a selective advantage that allows the mutated strain to proliferate despite treatment. As a result of this public health concern, medical practitioners and researchers are on the search for alternative antimicrobial agents to complement the role of antibiotics. It is here that phage therapy may find its place in future clinical practice one century after its initial discovery.

What is Phage Therapy?

Phage therapy uses phages, also known as bacteriophages, to target and counteract infections. Phages are a form of virus which infect bacteria. Their structure consists of genetic material surrounded by a protein capsid which makes up the “head” of the bacteriophage. This structure is complemented by the phage tail which is used to target and secure the virus to bacterial hosts (Figure 1). 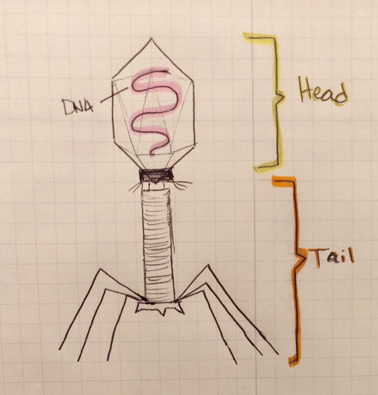 Phages were originally discovered by Frederick Twort and Felix d’Hérelle in the early 1900s. Shortly after their discovery, d’Hérelle managed to effectively apply phages as a treatment for dysentery infections, which at the time had no successful cure. While his success led to widespread enthusiasm for the potential of phage therapy, this treatment was quickly eclipsed in the western world with the introduction of antibiotics. However, it can be noted that the use of phage therapy has prevailed in various regions of the world, especially in the former Soviet Republic of Georgia where phages are standard in care.

How Does it All Work?

One of the biggest advantages of phage therapy is that phages are designed to be highly specific as a result of their ability to recognize bacterial cell surface receptors.  When a phage comes in contact with its target bacteria, there are a number of mechanisms by which the virion can impart its antimicrobial effects.  Phages can be harnessed for their potential to lyse bacteria through their lytic cycle and bactericidal enzymes as well as for their ability to increase the antibiotic sensitivity of target bacteria.

In the lytic cycle, phages replicate inside their target bacteria, making dozens of copies which will eventually destroy the bacterial cell so that these replicates may further disseminate into the environment (Figure 2). 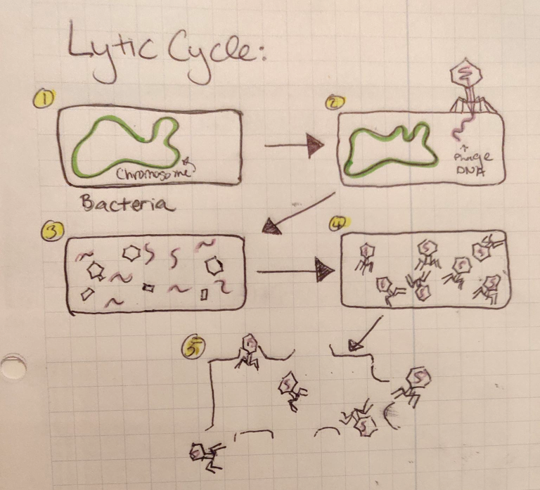 Figure 2: The lytic cycle starts when the host bacterium (1) is targeted by the phage and injected with viral DNA (2). This phage DNA is then used to create phage proteins (3) which are assembled into complete phages (4). The cell then breaks apart releasing the newly generated phages into the environment (5). Source: Emily Wilson.

Phages may also be harnessed for their ability to produce enzymes that target bacteria. Considerable research in this area has focused on endolysins which are the peptidoglycan hydrolases involved in cell lysis during the lytic phage cycle. This means these enzymes are capable of disrupting the bacterial cell wall which leads to the death of the bacteria.

Instead of replicating within the bacteria leading to cell death, the phage may also incorporate its own genetic material into the genome of the bacteria. Through this mechanism, known as transduction, phages are capable of introducing novel characteristics to their bacterial host. This can be applied in the clinical setting as phages are able to reintroduce drug sensitivity to antibiotic resistant bacteria by introducing drug sensitive genes as shown in Figure 3. Figure 3: Phages can introduce drug-sensitive genes into drug resistant host bacteria through transduction. In this process the recipient bacteria (1) is targeted by the phage carrying DNA with genes for drug sensitivity (2). When the DNA is injected (3) the bacteria will incorporate the viral DNA into its own genome (4), allowing for the expression of drug-sensitive genes. Source: Emily Wilson.

Where does Phage Therapy “Fit in”?

Antibiotics have taken the medical world by storm since their discovery in the early 1900s. These agents are highly effective at destroying bacteria in a broad range, non-specific manner making them a great tool to counteract infections. Antibiotics are nonspecific and therefore will attack both pathogenic and commensal bacteria which can lead to an imbalance and lack of regulation in the human microbiota. The human microbiota refers to the collection of commensal, or healthy bacteria that normally colonize the body. The microbiota serves a key role in the immune system’s first line of defense. Healthy bacteria inhibit the ability of pathogenic species to initiate colonization which is why the dysregulation of this system as a result of antibiotics can be problematic. Furthermore, overuse of antibiotics in healthcare has led to the development of antibiotic resistant bacteria.

This phenomenon has brought phage therapy back into focus as a way to counteract drug resistant pathogens and complement antibiotic treatment. Phages demonstrate very selective toxicity and therefore, when applied to living tissue, will leave cellular structures outside of their target unharmed. As a result of this trait, phages inflict less damage onto the patient’s healthy microbiota.

While lacking in quantity, clinical trials and case reports involving phage therapy have shown promising results. The PhagoBurn Clinical Trial is a phase I/II study initiated in 2015 that is looking to assess the use of phage cocktails in treating Escherichia coli and Pseudomonas aeruginosa bacterial infections in burn wounds. In vitro experiments show that engineered phages are capable of selectively killing Methicillin-resistant Staphylococcus aureus (MRSA), an antibiotic resistant bacterium, which indicates great potential of phages in treating drug resistant infections. Successful case reports of phage treatment in patients suffering from antibiotic resistant infections furthers optimism for the incorporation of phage therapy in standard medical care.

Phage therapy does not come without its limitations.  The current major downfall of this treatment route is the significant deficit in double-blinded, Phase III clinical trials that have been published to date. Phase III clinical trials are necessary to determine how a new medical intervention compares to existing treatments; however, they often require thousands of participants, copious amounts of funding and can take years to complete. Phages are also limited in their application as it is difficult to administer these agents intravenously, limiting their use to infections located more superficially within the body such as localized wounds or lung infections like pneumonia. As a maturing treatment there is currently no standard framework for application of phage therapy in western medicine which can inhibit their ability to be incorporated into treatment in the future.

Phage therapy is a promising contender as an antimicrobial intervention that can complement antibiotic treatment. As the realm of “personalized medicine” develops, phage cocktails will be able to be designed to match a patient’s specific disease. Given the pace of current scientific growth and social progress, in as short as a few decades, one may expect that phage therapy will be finding a predominant place in medical standards of care.

Wright, A., et al., A controlled clinical trial of a therapeutic bacteriophage preparation in chronic otitis due to antibiotic-resistant Pseudomonas aeruginosa; a preliminary report of efficacy. Clin Otolaryngol, 2009. 34(4): p. 349-57.