Fusobacterium necrophorum is an important pathogen in warm blooded beings- more so in animals than in humans. It was first discovered as a causative agent of calf diphtheria in 1884. In 1890, it was isolated from liver abscesses in cattle and lastly, in 1891, was coined as a source of human infections i.e., lemierre’s syndrome.

The interesting aspect to F. necrophorum is that it is a part of the human and cattle microbiota in the oral and gastrointestinal tract. In cattle, it serves an important function of digesting feed and fermenting the lactic acid consumed by the animal. But, it only becomes pathogenic in case of damage to protective surfaces in the body, making it a classic opportunistic bacteria.

In cattle, F. necrophorum causes liver abscesses (collection of pus) and calf diphtheria (infection impairing tissues involving oral tract). Normally, damage to the protective surface of rumen can be induced by the strongly acidic nature of the rumen i.e., acid-induced ruminitis, or by foreign objects like sharp feed particles. This damage offers F. necrophorum an opportunity to invade and colonize the ruminal wall. Once in the wall, the bacteria gains access to blood or induces abscesses in the ruminal wall, both of which allow the bacteria access to the portal circulation- circulation between liver and rumen. From the portal circulation, the bacteria is filtered by the liver, resulting in an infection and abscess formation in the liver. The abscess mainly consists of degenerated liver cells and immune cells that are impaired by the toxins produced by the bacteria.

In calves, diphtheria is caused in a very similar fashion. This condition is more common in young calves than in older cattle. In case of any damage in the oral cavity, the opportunistic F. necrophorum gains access to the protective layer through to the underlying muscle tissue. Here, with the help of the toxins that it produces, the bacteria causes necrosis i.e., death of the tissue. This leads to abscess formation. Infectious material might also be breathed into the lungs and cause abscesses there, which may result in breathing difficulties, and in extreme cases, death.

Lastly, in humans, F. necrophorum causes Lemierre’s syndrome. F. necrophorum is a commensal bacteria in the oral cavity of humans. It is believed that the bacteria becomes pathogenic if the host’s defenses are impaired by other pathogens. In such a case, the throat becomes infected and the infection reaches the internal jugular vein through the lymphatic spread from surrounding vessels. Here, the bacteria causes thrombophlebitis i.e., an inflammation that causes formation of blood clots.

All the aforementioned processes through which F. necrophorum establishes an infection in cattle, calves and humans, are illustrated in figure 1 for better understanding.

Research of incidences of Lemierre’s syndrome in humans have exhibited an average of around 1.4 cases per million population. For reasons unknown, the syndrome is found more often in males than in females with a ratio of 2:1. Moreover, it is most common in healthy teenagers and young adults, but some cases of older age groups have also been reported. Unfortunately, since the early 2000’s, the infection numbers have been rising and mortality rates have been reported between 4-18%.

F. necrophorum has several methods of avoiding the immune system of the host it is invading. It is equipped with endotoxins, hemolysins, haemagglutinin, adhesins and a capsule, but most researchers agree that the bacteria’s most important virulence factor are its leukotoxins. Leukotoxins are toxins secreted by bacteria that are specialised in inhibiting or destroying immune cells. F. necrophorum’s leukotoxins are cytotoxins capable of destroying hepatocytes, immune cells (macrophages, neutrophils) and ruminal epithelial cells. The toxin helps bacterial invasion by preventing macrophages and neutrophils from phagocytosing the bacteria and destroying the liver cells to allow invasion.

F. necrophorum’s leukotoxin has been found to be a soluble toxin with higher specificity for ruminant neutrophils than those of humans or other animals, though it can still infect those other animals. With a size of 336,000 Da, it is considerably larger than leukotoxins from other bacteria such as Staphylococcus aureus at 38,000 Da or actinobacillus actinomycetemcomitans at 114,000 Da. The operon responsible for the transcription of this protein, called lktBAC, consists of 3 genes. The structural gene of the leukotoxin is lktA, the second gene in the operon.

At low concentrations, the toxin can force systemic death of the affected cells, while at higher concentration it directly causes lysis in the cells. It was found to be more effective against neutrophils than against lymphocytes, especially in ruminants and humans. The toxin showed moderate effects against horse neutrophils, but the neutrophils of other animals such as rabbits and pigs were unaffected. The strains of F. necrophorum collected from bovine rumens were approximately 15 times less leukotoxic than those found in hepatic abscesses. The reason for this is unknown, however it does indicate that either not producing leukotoxins in the rumen is an advantage for the bacteria, or that there is some form of leukotoxin suppression occurring in the rumen.

The treatment for a F. necrophorum infection will usually depend on the severity of the infection. The treatment will almost alway involve some form of antibiotic, mainly B-lactams like penicillin or cephalosporin. These drugs act by targeting penicillin-binding proteins (PBPs), which are enzymes that are used by the bacteria to build their cell wall. These B-lactams will weaken the integrity of the bacteria’s cell wall, eventually leading to cell lysis. Some necrophorum bacteria have developed B-lactamase enzymes that allow them to counter the activity of penicillin. The relationship between PBP, B-lactams and B-lactamase is illustrated in figure 2. In these cases, doctors will often prescribe antibiotics that specifically target anaerobic bacteria, like metronidazole or clindamycin.

More serious infections may require the use of surgery as well. If left untreated for too long, the bacteria will cause the formation of necrotic tissue which will need to be removed surgically. Abscesses may also form, which will need to be drained by a doctor as well. In the case of Lemierre’s syndrome, the doctor may also prescribe blood thinners like warfarin or clopidogrel to counteract the bacteria haemagglutinin action. Thankfully, less than 5% of people diagnosed with Lemierre’s syndrome succumb to the disease. 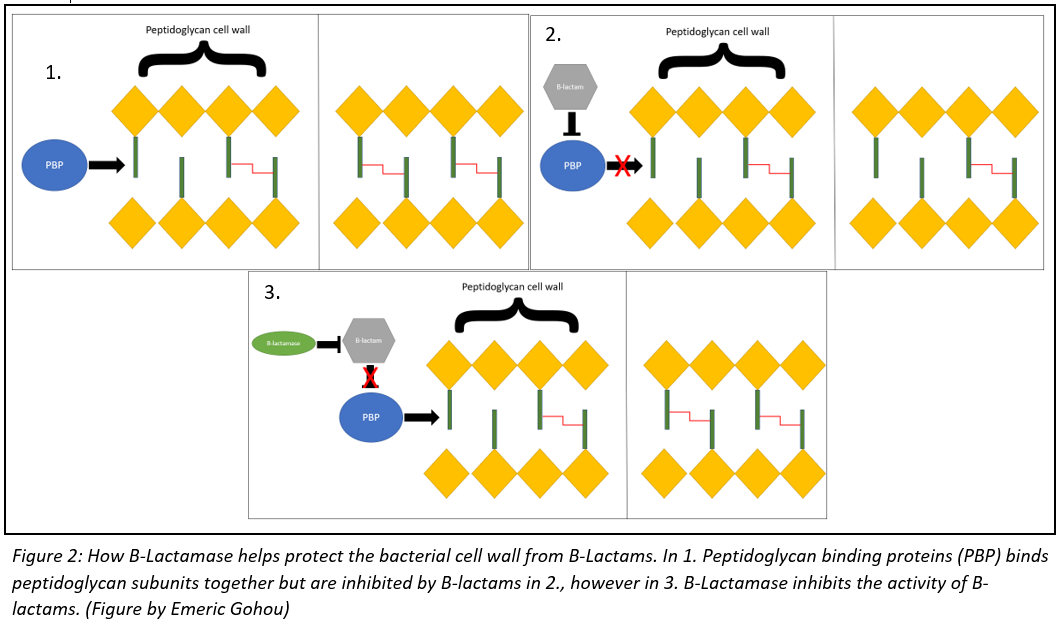 The treatment for cattle is similar to that used in humans. They are also given penicillin, as well as Non-Steroidal Anti-Inflammatory Drugs (NSAIDS) to decrease symptoms of fever and inflammation. Surgery is also used to remove necrotic tissue, as well as tracheostomies. A tracheostomy is an operation that inserts a tube into the throat linking it directly to the outside, and is used in cows with severe inspiratory dyspnea. The survival rate is generally high for cattle treated early, as well as a 60% surgical success rate for cows with advanced infections.

Langworth, B. F. (1977). Fusobacterium necrophorum: Its characteristics and role as an animal pathogen. BACTERIOL. REV., 41, 18.