By Alessandra Granata and Arianna Cancian-Kavoliunas

Typically, when we think of ways our bodies protect us from illness, we might think of things like the cells of our immune system, or our body’s mucus and skin barriers. However, something often overlooked is how proper nutrition also plays a vital role in the body’s ability to ward off pathogens.

Roughly one third of the world population is deficient in dietary Zinc (figure 1), and areas of the world with Zinc deficient populations often experience higher frequencies of bacterial infection. A team of researchers at the University of Adelaide set out to determine if dietary zinc levels affect susceptibility to bacterial infection. Narrowing their search, they specifically explored if there was a correlation between dietary zinc deficiency and susceptibility to infection by Streptococcus pneumoniae, a bacterium that causes a variety of conditions in humans, including pneumonia. Their research confirmed that adequate dietary zinc levels improves the body’s resistance to Streptococcus pneumoniae in humans (figure 2), but how zinc does this is not yet understood. 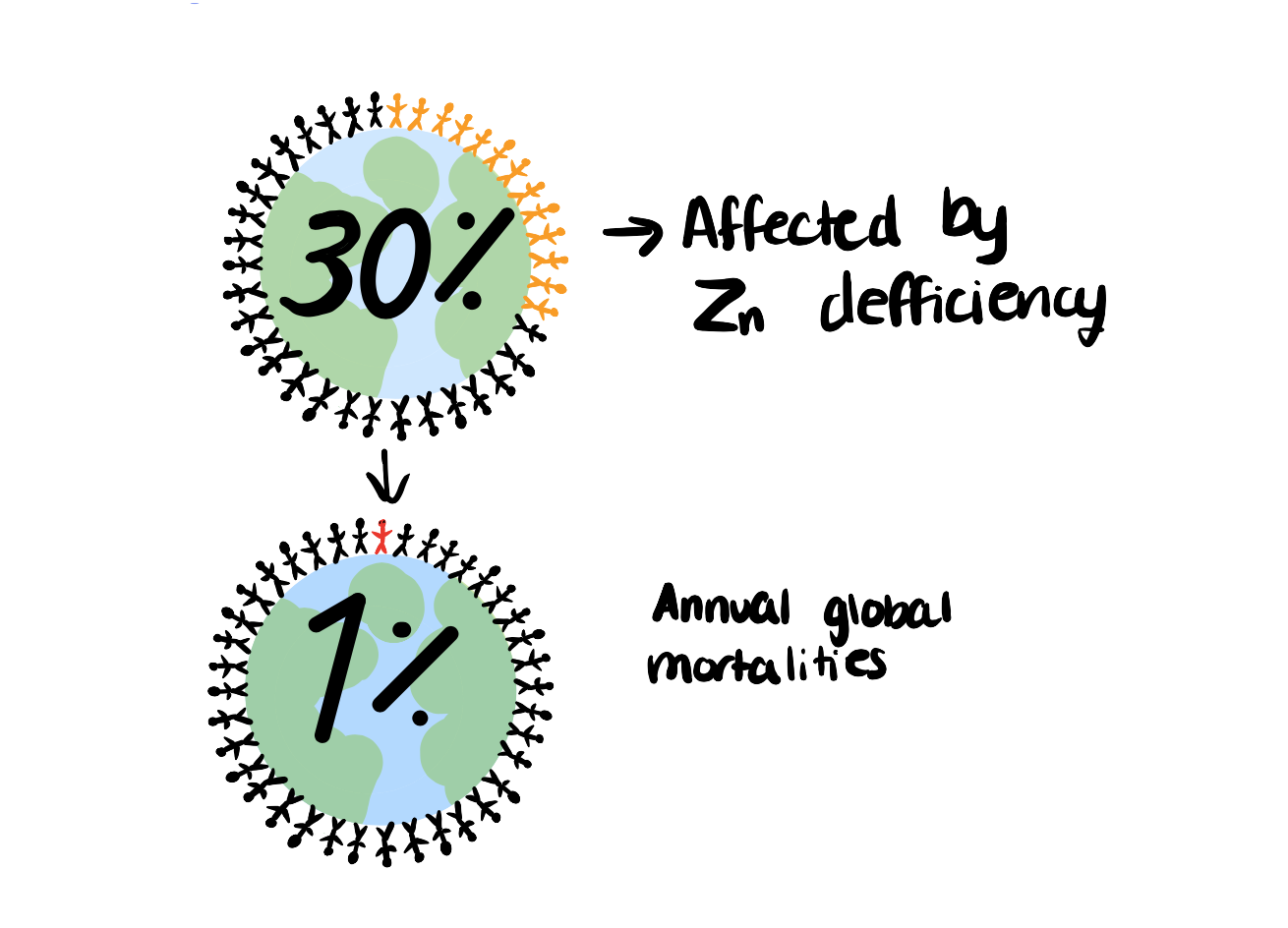 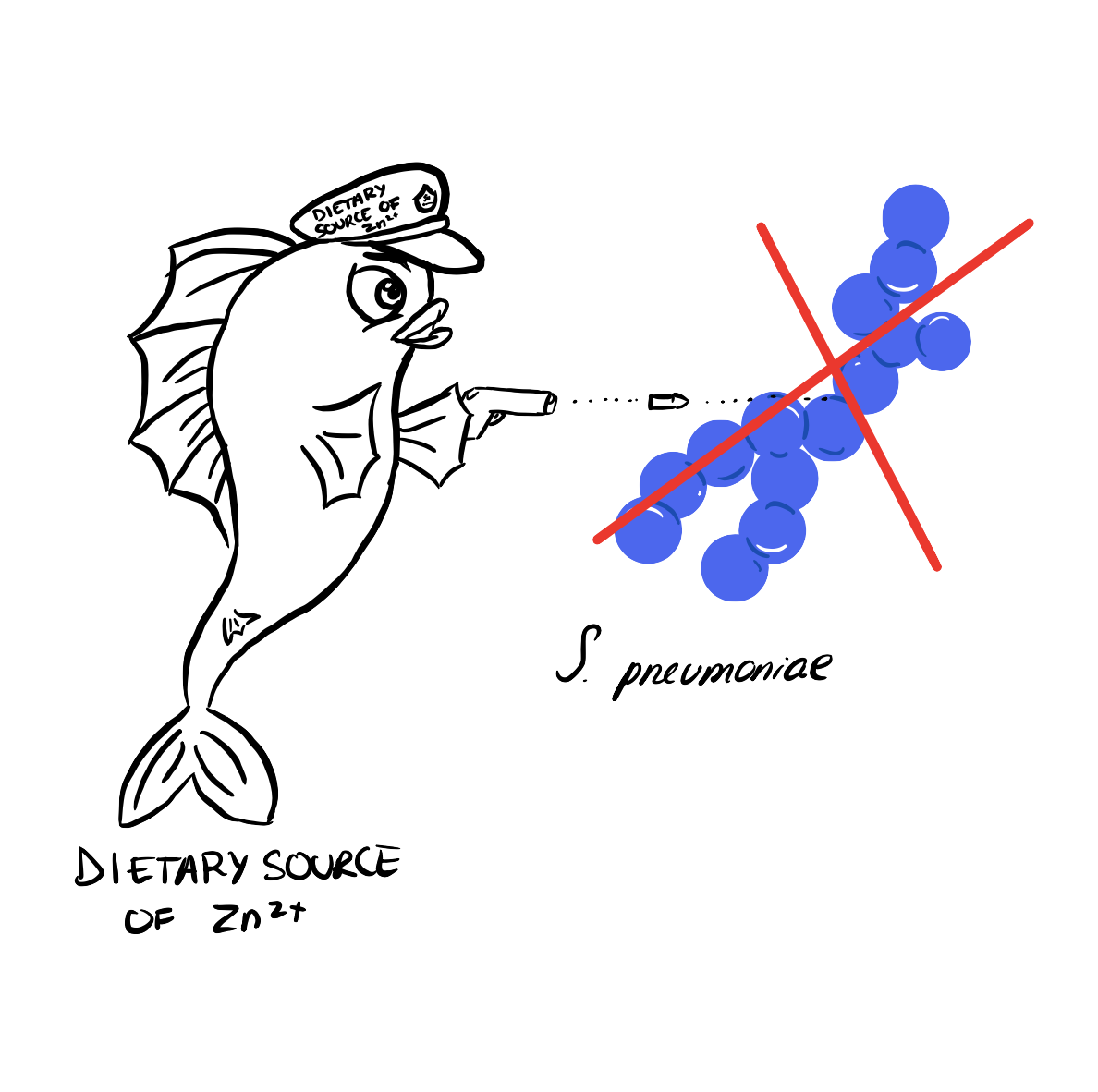 How does our body usually fight infections?

Before we can understand how zinc improves our resistance to S. pneumoniae, we need to first understand how we are infected by this bacterium (figure 3) and then how we would usually heal from it (figure 4). S. pneumoniae enters the body through the airways and begins to colonize the surface of tracheal cells, meaning that the bacteria multiply and form colonies on the cells that line the trachea. The infection can then spread to your lower respiratory tract, where some bacterial cells become martyrs. These cells will commit “suicide” in order to release pneumolysins, toxins that destroy host cells including lung epithelial cells. As well, because the body’s immune system has been triggered, a variety of responses are happening. There is an increase in inflammation and blood vessels have become more permeable. S. pneumoniae uses your body’s natural immune response, along with the pneumolysins released by some of its martyrs, to enter your blood. S. pneumoniae can then travel to your brain, causing infection in the form of meningitis via the same mechanism it used in the lungs. As for how the body fights the infection, after inoculation of the host, resident phagocytic cells are recruited to the site of infection. Phagocytic cells are cells that do phagocytosis, which means they use their plasma membrane to engulf a foreign substance. After they are recruited, the phagocytic cells start to phagocytose some of the S. pneumoniae bacteria while also triggering inflammation of the host tissue and emitting an alarm signal. This alarm signal from the phagocytic cells will activate special cells, called T cells, which can then trigger other immune cells, called B-cells, to produce antibodies. Antibodies are Y-shaped proteins that can neutralize pathogens by specifically recognizing a molecule, called an antigen, secreted by the pathogen. The antibodies are released by the B cells and surround the pathogen, which “tags” the Streptococcus pneumoniae bacteria so that our phagocytic cells can recognize and neutralize them more quickly. 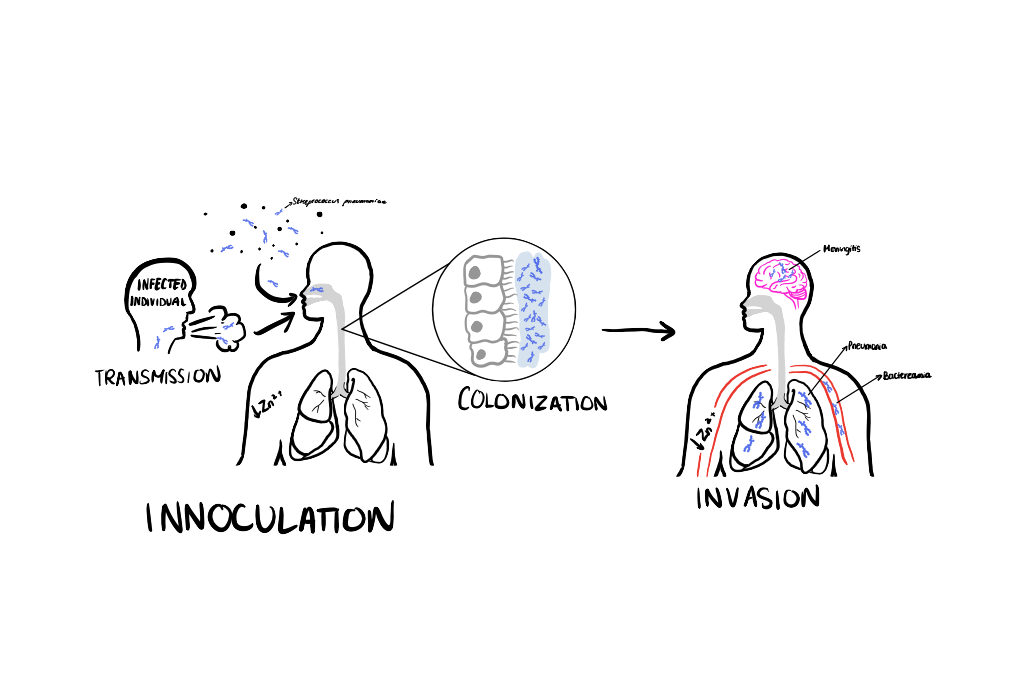 Figure 3: Inoculation of host with S.pneumoniae. This image explains how you are infected with the bacteria S. pneumoniae. First, an infected individual spreads S. pneumoniae into the air, and you breathe it in. The bacteria then colonizes the surface of your tracheal cells, and eventually, it is able to spread, through the blood, to other parts of the body. The symptoms commonly associated with severe infection by S. pneumoniae include pneumonia in the lungs, bacteremia as the bacteria grows and travels in the blood, and meningitis in the brain. Source: Arianna Cancian-Kavoliunas 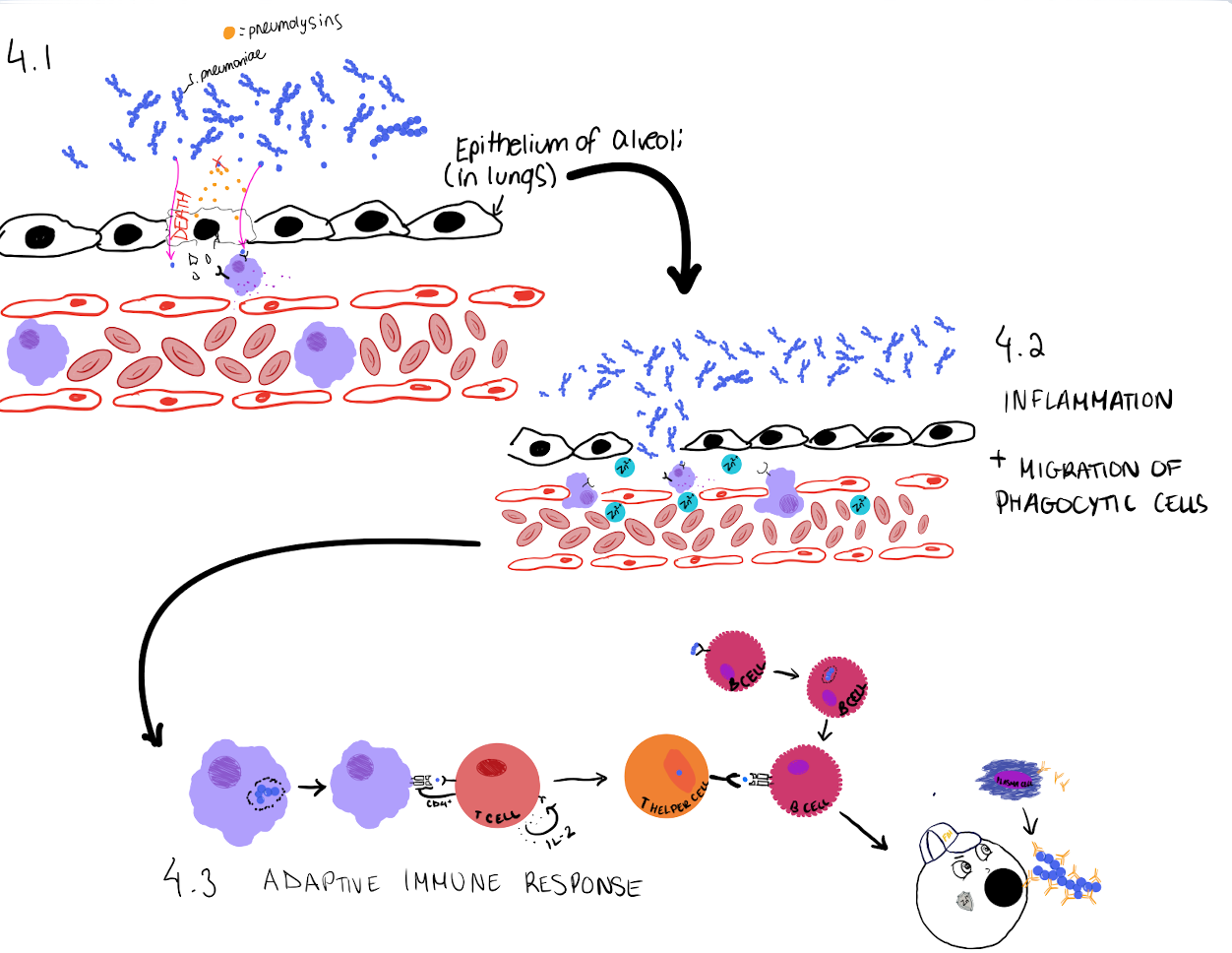 Figure 4: The immune response when S. pneumoniae is found by the immune system. Resident phagocytic cells begin to sense host cell damage, caused by the toxins secreted by S. pneumoniae, using receptors on their cell membrane. Cell damage also allows S. pneumoniae to infiltrate the tissue and be sensed by other receptors on phagocytic cells. The phagocytic cells will then engulf the bacterium, or the segment of the bacterium. As well, the macrophages secrete molecules that signal other cells to start an immune response. These signals trigger an increase in inflammation, cause blood vessels to become more permeable, and even recruit other immune cells to the site of infection. If Zinc is present, it will migrate from the blood into the tissues and potentially induce Zinc toxicity in S. pneumoniae. The macrophages will present the processed segment of S. pneumoniae to naïve T cells. These T cells will then be triggered to form activated T helper cells. These activated T cells can then secrete molecules and activate B cells, which will form antibodies against S. pneumoniae. The antibodies will tag the bacterium for it to be easily phagocytosed. The image displayed represents only one part of the immune response, the body will work tirelessly to try to eliminate the bacterium. Source: Arianna Cancian-Kavoliunas

Why are metal ions important for bacteria?

Metal ions, like Zinc, are necessary for bacteria to grow and develop, but just like most things in life, too much or too little can often be dangerous. S. pneumoniae can often become intoxicated by high levels of Zinc. However, to try to starve the bacterium of Zinc, our bodies have developed really good ways of hiding it. And even so, some bacteria still outsmart us! In an evolutionary arm’s race, bacteria like S. pneumoniae have found ways to steal those ions from us using proteins called metallophores.

What the study showed

The team of researchers from the University of Adelaide, Eijkelkamp et al., were able to show that Zinc significantly affects the number of bacteria and the level of infection present in the individual. The study found that although the number of S. pneumoniae increased 24-36 hours after the infection in both the mice with Zinc deficiency and the mice without, the increase was way more significant in the mice with low levels of Zinc (figure 5). Eijkelkamp et al. also found that 36 hours after infection, there was a lot of Zinc present in the lungs of the mice that had enough dietary Zinc circulating in their blood. They had discovered that Zinc was able to travel from the blood into lung tissue during the infection causing Zinc intoxication to the bacterium only in that specific environment. Zinc intoxication disturbed the level of manganese in S. pneumoniae, which made it harder for the bacterium to thrive. Manganese is an essential metal ion for the growth and survival of S. pneumoniae. This ion normally protects S. pneumoniae from toxic oxidative stress caused by Reactive Oxygen Species (ROS). They also found that Zinc acted as an antimicrobial and helped in the activation of the immune response. Eijkelkamp et al. also found that Zinc was transported into tissues by phagocytic cells, and that the presence of this metal ion had a positive role in increasing inflammation and killing bacterial pathogens. Zinc deficiency is known to decrease the immune response by decreasing the number of functional immune cells like derivatives of T cells. Because the immune system is compromised, the individual has a more difficult time fighting the infection caused by S. pneumoniae. 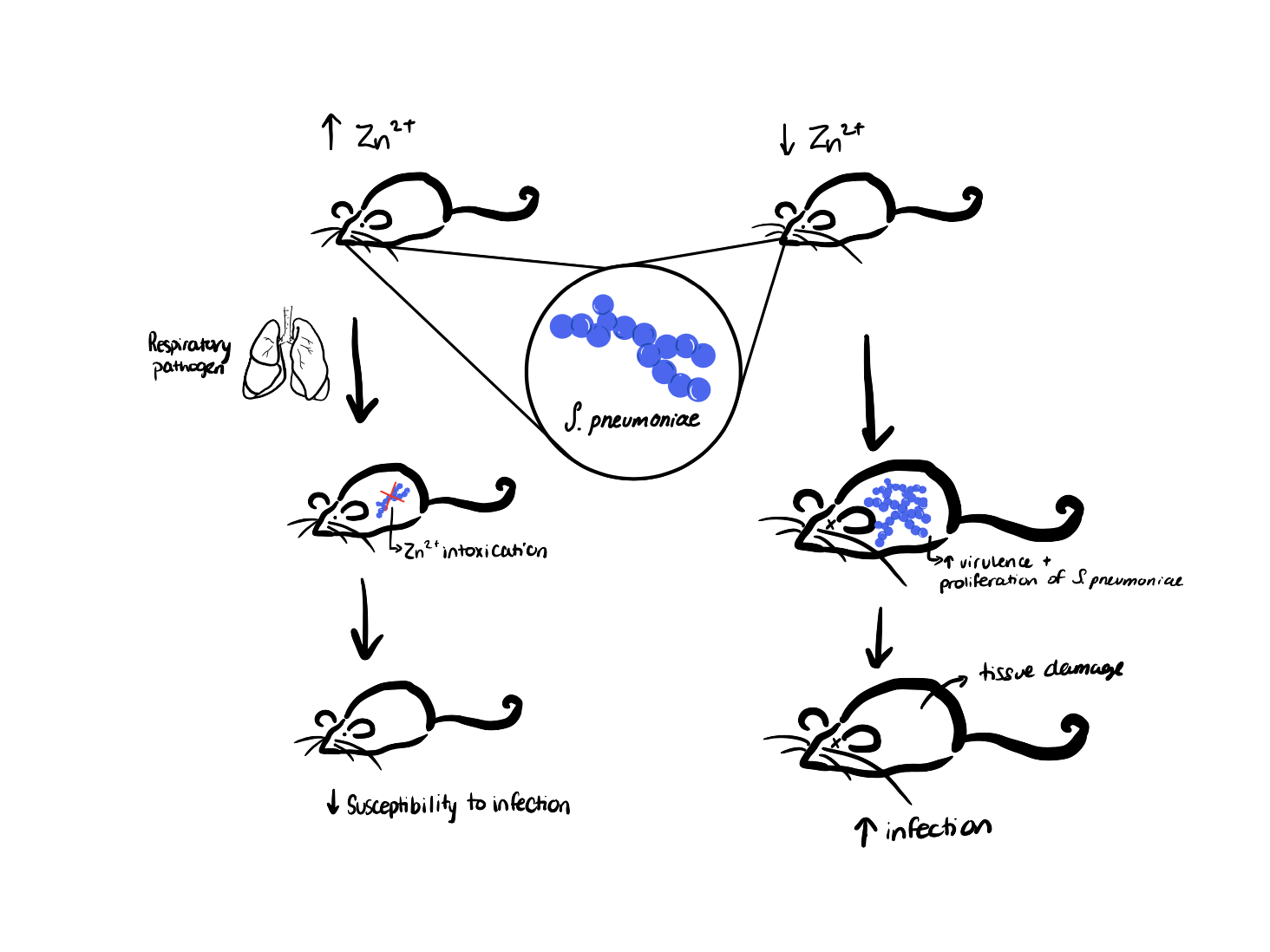 Why are the study’s findings important?

This study highlights the importance of ensuring that populations in developing countries have access to proper nutrition including a good intake of essential vitamins and minerals. According to the Government of Canada, approximately 2 billion people are not receiving the required amount of vitamins and minerals in their diets! As malnutrition continues to be a growing global concern, other problems related to poor diets have surfaced. Diets that are low in micronutrients, such as zinc, have been shown to increase the risk of acquiring various infections. Another study also found a direct correlation between death from these infections and the level of malnutrition.

Is anyone doing anything to change global zinc deficiency rates?

The WHO funds a World Food Program to ensure that the basic human right, the right to proper nutrition, is met around the world. Programs like this are vital to the prevention and reduction of death and cases of bacterial infection. Zinc supplementation could also be a viable option for mass disease prevention, however the efficacy of supplementation strategies varies, and the reason for this variation is unknown because we still don’t know the exact mechanism zinc uses to prevent bacterial infection. Therefore, more research on the antibacterial mechanism used by zinc would allow for the development and implementation of strategies for the prevention of bacterial infections.