By: Marco Marcogliese and Maude Tanguay

Canine Leptospirosis is categorized as a zoonotic disease which has caused increased concern over the past several decades in a vast majority of countries throughout the world. The disease is mainly caused by spiral, gram-negative bacteria of the genus Leptospira interrogans sensu lato (Sessions & Greene, 2004). Such bacteria can be further categorized into antigenically linked serogroups which are sorted into distinct serovars. Serovars are defined as recognizable variations between bacteria or viruses belonging in the same group (Goldstein et al., 2008). As the disease was initially discovered in 1899, it was believed that the serovars icterohaemorrhagiae and canicola were the bacteria mainly responsible for the majority of clinical cases of canine leptospirosis up until 1960.

Therefore, bivalent vaccines responsible for targeting the two most popular serovar infections of the disease were administered and had seemed to slowly prevent its dissemination across North America (Rentko et al., 1992). However, over the past two decades, increased incidence of Leptospirosis in dogs linked to novel strains has been increasing, with the most common strains reported in the United States included L. kirchneri serovar gripptyphlosa and L. interrogans serovars pomona and bratislava (Goldstein et al., 2008). To this effect, small outbreaks of canine Leptospirosis have become more prominent in certain states throughout the United States, more specifically in the Maricopa County of Arizona (Jenni et al., 2019).

The sudden uptake of reported cases of Canine Leptospirosis has mainly been attributed to exposure to wild reservoir hosts found in rural or suburban areas. The bacteria are transmitted amongst its hosts via both direct contact with other infected species or indirect contact with substances such as water, soil, food, and infected feces (Sessions & Greene, 2004). The main routes of infection involve the penetration of the host’s skin tissue after exposure to contaminated by-products. Once intruding the host’s body, leptospirosis bacteria (i.e. leptospires) invade the bloodstream to infect multiple sites of the host such as the liver, spleen, kidneys and the central nervous system. These bacteria are highly motile and flexible and are composed of a spiral structure with hook-shaped ends (Figure 1), meaning they can spread throughout the body rather quickly and attach to various structures within the body and begin replicating (Goldstein, 2010).

The amount of damage to such internal organs is dependent on the virulence of the serovar alongside the host’s vulnerability and amount of exposure (Farr, 1995). Severe acute infections of the disease can exhibit bacterial colonization of the renal system as their optimal growth conditions are found within the cells that line the renal tubules. This results in critical renal failure due to tubular damage as the bacterium can destroy such cells which are crucial in lining these important intricate tubules found in the kidney (Sessions & Greene, 2004). The bacterium can then be excreted in the urine and further increase the rates of infection as a result. 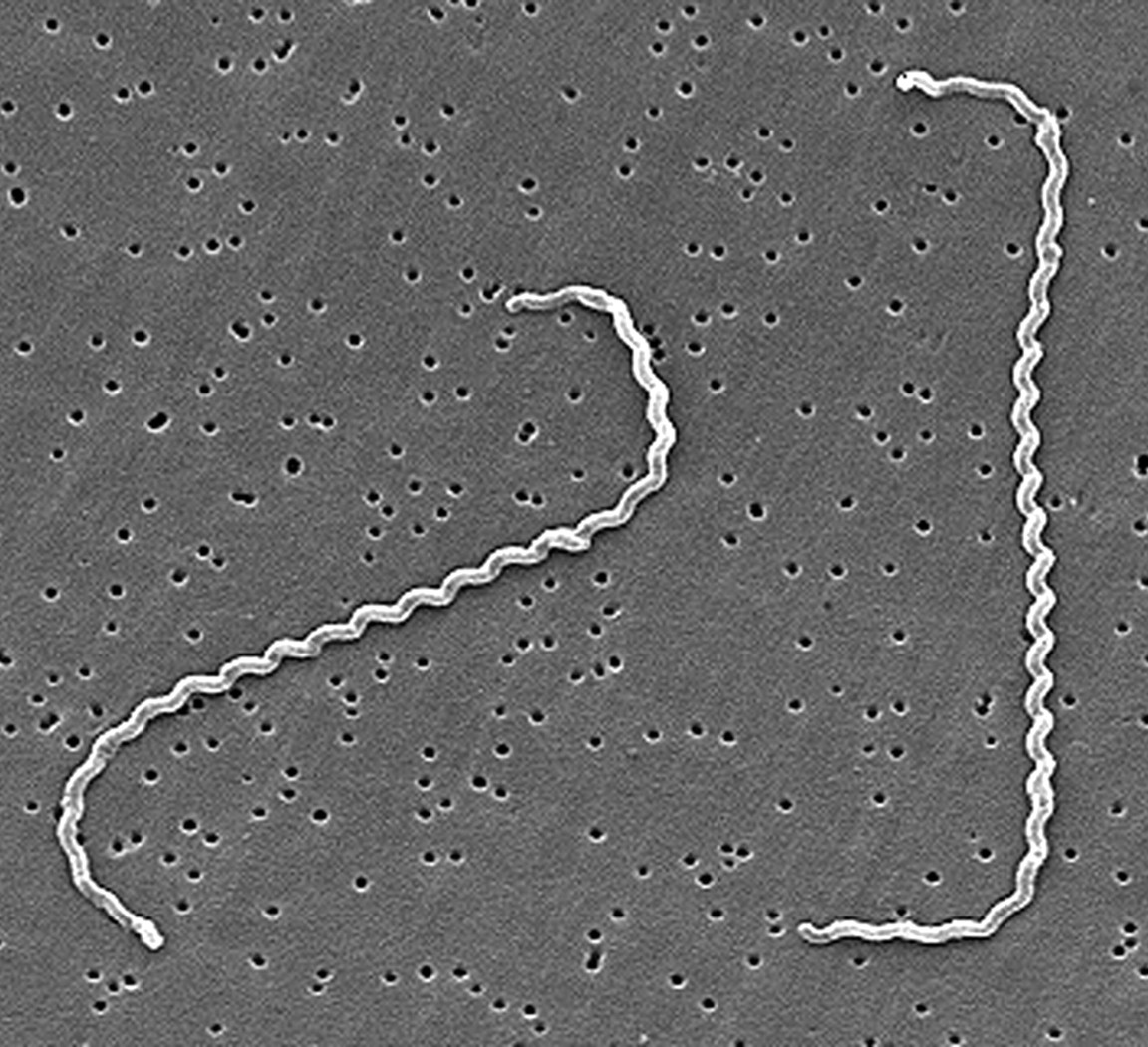 Canine leptospirosis has been a known and common zoonotic disease for over 100 years in America (William & Karesh 2017). With cases steadily rising each year in canines, it’s important to understand which factors contribute to the prevalence of outbreaks and to its disproportionate rate of incidence in different areas. Understanding the source of outbreaks is also important for public health since canine leptospirosis can be a zoonotic transmitted disease (Jenni et al., 2019). The environmental factors characterizing different regions are the most noticeable source of outbreaks in multiple studies which have retrospectively studied canine leptospirosis. In a recent meta-analysis, dogs exposed to large environmental water sources were around 68% more likely to be infected (Ricardo et al., 2020). More specifically, stagnant water sources and floods seem to be frequently contaminated with Leptospira serovars. The pathogens which are shed through the urine of infected animals survive for long periods of time when found in water and until they come in contact with a susceptible host’s skin or mucous membranes (Goldstein, 2010). Areas inhabited with wildlife such as suburbs, fields or forests have even higher potential of leptospirosis infection since there are no preventative measures put in place to reduce their rate of infection. Although studies were able to easily identify different variables contributing to outbreaks, the correlation between the risk of being infected with disease with these variables has yet to be proven (White et al., 2017).

Socioeconomic factors are also a large reason for outbreaks of the disease in dogs. Studies show that dogs living in lower income neighborhoods were not only more exposed to the various environmental factors associated with the disease but also had less access to veterinary care and lower vaccination rates (Ricardo et al., 2020). Historically, areas with lower income often have a lesser understanding and knowledge regarding vaccines which makes them hesitant to vaccinate their pets (Jenni et al., 2019). On the other hand, studies also showed that some middle class areas had higher infection rates. This was suggested to be caused by an increased amount of testing being possible with the higher income of clients in the area (Taylor et al., 2021).

Being a widely known disease and pathogen, Canine Leptospirosis outbreaks are frequently reported. A notable example of this is the Maricopa County outbreak in Arizona which was reported in 2017. Despite the low amounts of annual rainfalls or the lack of humidity which are unfavorable for the growth and dissemination of the organism, the state of Arizona has been reporting multiple clusters of the infection in the last few years (Ward, 2002).  Knowing that leptospirosis is much less frequent in drier desert environments such as Arizona, public health officials thought crucial to find out the cause of these canine leptospirosis outbreaks.

The 2017 outbreak presented many cases where infected individuals presented with one or two clinical signs less commonly associated with leptospirosis such as conjunctivitis and vomiting. Less than 40% of the cases presented with fever, the most common clinical sign of canine leptospirosis (Jenni et al., 2019). This leads to the disease not being tested for as quickly as it should be which increases the chances for an infected animal to contaminate its environment (Langston & Heuter, 2003). Essentially, the diagnosis of this disease in canines is quite challenging as it is affected by the stage of the disease, the vaccination status of the individual, the environment and potential exposure to the pathogen (Reagan & Skyes, 2019). The available tests each have their strengths and weaknesses. Using a combination tends to be the most effective and efficient way to get a quick and accurate result but also more expensive for pet owners (Reagan & Skyes, 2019).

These studies identified that since the environment in Arizona shouldn’t allow for the pathogen to survive, veterinarians don’t tend to be as vigilant or up to date with the latest protocols regarding the disease as veterinarians in high risk areas. (Jenni et al., 2019). Furthermore, this outbreak was composed mostly of cases from dogs living in urban areas which also indicates that different attitudes and practices among veterinarians in different areas most likely heavily impacted the prevalence of the disease.

With veterinarians being the first to work with and diagnose the disease, it is important for them to keep up with the latest strategies and protocols regarding diseases such as leptospirosis especially after important outbreaks such as the one in Maricopa County in 2017 (Jenni et al., 2019).

The first step to ensure the prevention of the disease in animals as well as humans is increasing disinfection and improving hygiene when possibly having had contact with animal urine. These are easy and necessary precautions which should be taken regardless of the area’s risk for leptospirosis (Jenni et al., 2019). Limiting the amount of contact between dogs and any potentially contaminated water source is also an important first step in preventing the disease (Goldstein, 2010).

The most efficient way for veterinarians to prevent canine leptospirosis is by administering vaccines (André-Fontaine, 2006). Since the leptospires are frequently shed by a multitude of wild animals, it is impossible to assume that domesticated animals could achieve herd immunity since so many acquire the disease from water or soil contaminated by infected wildlife. The vaccine allows for dogs to have antibodies against the disease allowing the immune system to be equipped to quickly clear the infection should the animal come into contact with the pathogen. (André-Fontaine, 2006). As seen with the study conducted by Blanchard et al., (Figure 2) introducing annual vaccines which target several of the common serovars associated with Leptospirosis can decrease the ability for the organism to colonize the host and reduce the amount of potential reservoirs in an environment (2021). Leptospirosis vaccines should also be mandatory in places such as kennels and groomers to decrease the chances of spreading the disease to more individuals. (Langston & Heuter, 2003) Infected dogs should be isolated and their urine should be contained and disinfected in order to decrease the chances of infecting another individual.

Finally, veterinarians should be aware of the latest news regarding the disease, especially with the number of cases rising each year. Improving education and awareness about zoonotic diseases will allow veterinarians to be better prepared at preventing, treating and most importantly managing the incidence rate of canine leptospirosis (Venkat et al., 2019). Creating a standardized vaccination protocol would be beneficial in reducing the impact of the different approaches between veterinarians while also preventing outbreaks in unsuspecting areas such as Arizona. There is also a need for better communication between veterinarians and public health officials to prevent outbreaks and reduce the amount of cases overall.

To conclude, the Maricopa County canine leptospirosis outbreak of 2017 was largely due to veterinarians and health officials not considering the state to be at risk for this disease in dogs due to the dry and desertic climate. However, since wildlife have a large role in spreading the disease, they can cause outbreaks in unsuspecting areas where domesticated animals might be less protected and where prevention against canine leptospirosis isn’t as common. As cases rise, it will be important for veterinarians all over to increase the amount of prevention against canine leptospirosis and to increase awareness about the disease in order to reduce the chances for future outbreaks.

Ward, M. P. (2002, December 30). Seasonality of canine leptospirosis in the United States and

Canada and its association with rainfall. ScienceDirect. https://www.sciencedirect.com/science/article/pii/S0167587702001836?via%3Dihub