Brucella canis is a gram-negative coccobacilli (figure 1) animal pathogen and is the causative agent of canine brucellosis, which affects the reproductive organs of both male and female dogs. It is a zoonotic pathogen, meaning that although it normally exists in animals, it can be transmitted from animals to infect humans. B. canis was first isolated from dogs in the United States in 1966 after a widespread outbreak occurred in Beagles. Transmission of B. canis is caused by contact with fluids and secretions from infected dogs making this a widespread problem in many dog kennels.

Figure 1: Microscopic image of an extraction of Brucella canis, which is a gram-negative coccobacilli found in dogs, and appears as fine sand under microscope when stained. Source: Public Health Image Library, Centers for Disease Control and Prevention, Larry Stauffer (2002).

Infection by B. canis is mainly acquired by penetration of mucous membranes by the organism. B. canis usually resides in fluids such as genitourinary secretions, vaginal discharge and semen or milk from the mother and is transmitted through sexual or oral contact with infected fluids. It can also be transmitted in utero (from infected mothers to babies) or by fluids from infected aborted fetuses and placentas, as well as by inhalation or ingestion. Once the organism enters the dog it will get phagocytosed and sent to the lymphatic tissue to multiply and develop. After being incubated the bacteria will then travel to other organs in the dog by hematogenic (blood) routes. This infection can lead to reproductive failure, abortion, prolonged vaginal discharge and stillbirths in female dogs and infertility, testicle atrophy and epididymitis in male dogs. Other symptoms may include puppies that are born live but weak, that will often die soon later, as well as later development of lymphadenitis which is an enlargement of the lymph nodes. Although B. canis is a zoonotic disease, its effect on humans is not as severe as it is on animals and is not yet very well understood.

The rate of infection from B. canis is still not very well-understood.  In 1970, the prevalence of the disease was around 6% worldwide. However, this varies by location.  In Canada 1.6% of dogs were infected in 1970 but in Asia 11% of dogs were infected in 1976-1977. Rates of infection are a lot higher in low income countries and the incidence of B. canis infection is still on the rise. There have been reported cases of the disease worldwide, especially in dog kennels and dog breeding facilities where many dogs are in close contact with each other. All breeds of dogs are susceptible to canine brucellosis however, they are more vulnerable if they are in confined populations and they are breeding or during abortions as the disease can spread faster. Stray dogs are also more susceptible to this disease than pet dogs, and dogs who have been spayed or neutered present a much lower risk at acquiring the disease. Canine brucellosis can occur in dogs of any age or sex but is most common in newborns and female dogs. The mortality rate from this disease is low except for in fetus or newborn dogs. In such cases, the risk of death is around 75% during outbreaks. Most outbreaks are due to contaminated fluids or introduction of contaminated dogs into kennels or breeding facilities as it facilitates the transmission of the disease. In this case outbreaks occur rapidly since even contaminated saliva or urine can carry the organism. Infected mothers can have infected offspring which can also spread the disease.

B. canis will start infection by penetrating through the membrane of fluids, which will then enter the dog in order to get to the lymphatic and genital tissues. When B. canis enters the dog, it can then invade both phagocytic and non-phagocytic cells in the bloodstream.

In the case of phagocytic cells, the organism is phagocytosed by cells in the dog. These cells are called phagocytes and they pick up the organism to kill it. However, this bacterium is able to circumvent the killing action of the phagocytes in order to replicate within the host. When in the bloodstream, B. canis quickly develops into intracellular pathogens contained within circular polymorphonuclear cells (PMNs) and macrophages. This means they can easily survive the killing action of these cells. The main reason that they can circumvent the killing action is because of their rough lipopolysaccharide (LPS) coat. The adenine and guanine monophosphate production of the coat inhibits phagosomal fusion and oxidative burst activity. This prevents killing of the organism by phagocytes.

In the case of non-phagocytic cells, the organism hides in there to avoid the immune system. It is easily able to overcome innate immunity at very early times of infection. Since B. canis has low virulence in the host, it a poor activator of cytokines such as tumor necrosis factor (TNF). These are cells that promote inflammation in the host in response to a pathogen. As a result, B. canis is able to avoid activation of the complement system of the immune system.

The surviving brucella are then transported to the lymphatic and genital tissues hematogenically, which means it gets to these tissues by blood routes. Once in these tissues, the bacteria will multiply and develop and a leukocyte-associated bacteremia (bacteria that is in the blood) will distribute the bacteria to other organs and systems within the dog (figure 2). The spread of the bacteria within the dog will cause the development of clinical lesions in the dog and hyperplasia of the lymphoid tissue, which is enlargement of the lymphoid tissue due to the concentration of bacteria in localized regions. After the lymphoid tissue expands it can cause the production of Peyer’s patches which are small masses of lymphatic tissue and there is also an increase in lymphocytes, macrophages and plasma cells. This increase in cells will promote chronic infection in the dog and lead to reproductive failure after a few months incubation. Symptoms only show after a few months incubation because as part of the bacteria’s strategy it remains asymptomatic for a while in order to spread throughout the dog. 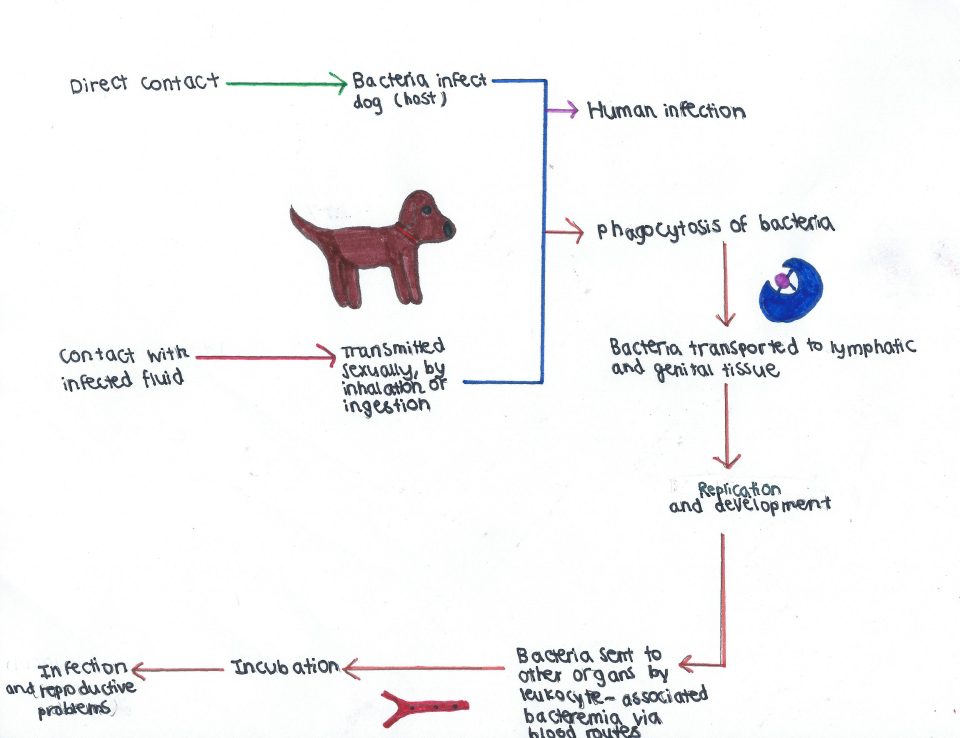 Figure 2: Pathway of infection and damage of Brucella canis in dogs and zoonotic potential of the virus in humans. Source: Baylie Daghofer-Hawes.

In order to prevent further spread of canine brucellosis, isolation of infected dogs is first required. Spaying or neutering dogs has also been shown effective in prevention of this disease in many cases. Treatment of canine brucellosis can be accomplished rather easily due to the fact that B. canis is short-lived outside of the body. It is rather sensitive to many disinfectants and degreasers as they are able to effectively remove the biofilm that builds up in the population. Long-term treatment with antibiotics has also been shown to successfully treat dogs with canine brucellosis. Since B. canis has a long incubation time inside the animal, the antibiotics needs to be given consistently on the long-term. A combination of minocycline and streptomycin have been proven the most effective antibiotics as they sequester the bacteria to inhibit its growth.