by Rebecca Novac and Corina Orsini

In September of 2017, federal health officials in the US began investigating a multistate outbreak of Campylobacter infections. After sequencing the genome of the bacteria found in several infected individuals and their animals, it was determined that the same antibiotic resistant Campylobacter was present in all of them. While there were no recorded deaths associated with this outbreak, there were 67 cases across 15 states (Figure 1), leading to 17 hospitalizations. This is a recent outbreak and therefore not much is known about the disease causing species. However, we propose that Campylobacter jejuni is the most probable cause of this outbreak.

Figure 1: Number of people infected with campylobacteriosis in each state of the United States during the 2017 Campylobacter outbreak. Source: Center for Disease Control and Prevention, Case Count Maps (2017).

Description of the disease

Campylobacteriosis is a zoonotic disease most often caused by Campylobacter jejuni (Figure 2). It is transmitted through the fecal-oral route and even a very low dose can lead to bloody diarrhea, abdominal pain, fever, nausea and vomiting. C. jejuni is able to easily cause disease due to its ability to move away from the host immune system and towards nutrients with its polar flagella. Companion animals often get the disease from eating raw or undercooked meat. They then continue to shed the bacteria in their feces for 2-7 weeks, whether they show symptoms of the intestinal disease or not, which is how they pass it on to human hosts. Campylobacter species are very resistant to antibiotics and animals can become persistent shedders despite antibiotic therapy. While most people can recover without specific treatment other than heavy fluid consumption while the diarrhea lasts, severe cases of the disease demand treatment with a broad spectrum antibiotic such as erythromycin. This is most common in those with weak immune systems such as the elderly, AIDS patients, chemotherapy patients, etc. The antibiotic resistant properties of this specific strain may complicate treatment and prevent high risk patients from recovering from the illness. While there are no recorded deaths associated with this outbreak as of now, The pathogen has the potential to be deadly in the future if there are no new antibiotics discovered. The class of antibiotics currently being used are commonly found in poultry feed which has been proposed as a main contributor to the development of resistance. 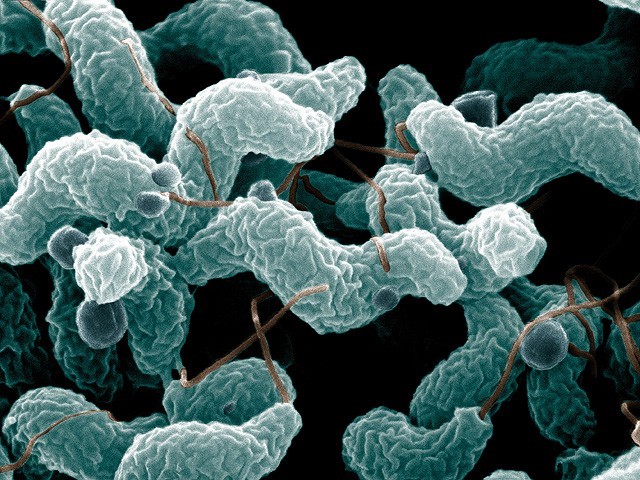 Figure 2: A scanning electron microscopy picture of Campylobacter jejuni (in blue) and its flagella (in brown). Source: University of Leicester.

Source of the outbreak

In this outbreak, 93% of the infected individuals were directly linked to puppies from an Ohio-based Petland store and the others reported contact with puppies from other sources. Therefore, the Campylobacter bacteria was present in one of the puppies sold at the Petland store, which then spread the bacteria to the other puppies. Since, this is a zoonotic disease, the infected puppies transmitted the bacteria to all humans in contact with them, including employees at Petland and people who purchased, or visited a puppy at this pet store.

Cause of the outbreak

This outbreak of Campylobacteriosis occured because one, or more puppies already infected with the bacteria, most likely from eating raw meat and living in a crowded environment, were brought from commercial breeders to the Petland store. Although most infected puppies showed signs of infection, some did not, which increased the risk of transmitting the bacteria to others. Once in the store, the infected puppies continued to shed the bacteria in their feces. All other animals who came in contact with their stool contracted the disease, and they too began to shed the bacteria in their feces, continuing the cycle. Meanwhile, the humans in contact with these puppies and their stool contaminated their hands with Campylobacter. If these individuals did not properly wash their hands and proceeded to touch their face, or the food that they were eating, then the bacteria was transferred to the humans (Figure 3). Once in the human, the bacteria is also shed in their stool; however, further transmission from human to human is very unlikely because we do not usually interact with human feces.

Figure 3: The transmission of the Campylobacter bacteria from canines to humans. Source: Rachel Novac.

How the outbreak was ended

As soon as the employees at Petland were aware of the Campylobacter outbreak, they began setting up sanitary stations throughout the store and stuck to a strict sanitation protocol made by veterinarians. In addition, the infected animals were isolated from those who were not yet showing any signs of the disease until the infection cleared. Moreover, public health recommendations were made to pet owners, which include being aware of the risk factors associated with feeding pets raw food, prompt cleaning and sanitation after the animal has defecated and washing your hands well after handling puppies.

The CDC did not recommend any changes to Petland processes after reviewing kennel documentation, but the company is still not getting off the hook. Petland is now facing a class-action lawsuit from the Animal Legal Defense Fund who is accusing the business of guaranteeing the health of puppies that it knew were prone to illness and defects. Many cities have put laws in place to ban the selling of puppy mill puppies and Petland is the only major pet shop chain left that is selling dogs from commercial breeding operations. This outbreak will likely put pressure on the company to make the transition to selling puppies from a more reliable source.